Wood stove maintenance is not a subject I feel wholly competent to discuss.  It’s something that I haven’t seen come up in other homesteading blogs though.  I’m running into people coming North from southern climes.  They have no experience with wood stoves at all.  Therefore, I’m going to talk about how to burn wood in a wood stove.

But first I’m going to talk about wood stoves in general.

Whatever you do with a wood stove or chimney is at your own risk.

If you are reading this post because you are thinking of getting a wood stove, well, don’t.  I recommend a rocket mass heater.  Check out http://www.permies.com/wood-burning-stoves.html  (I took part in the kickstarter for the DVDs.  I’m not a joiner normally, but I’m proud of my contribution)

First, a little history.  Fireplaces have been around forever.  Before electricity and probably before the wheel.  They are better than nothing, but terribly inefficient.  House fires have been around as long as fireplaces.  There’s something to learn there.

Wood stoves came around in the 1700’s (I am not Wikipedia, but you should doubt my info as well) by the likes of Benjamin Franklin (or Amos if you prefer) and others.  There were different designs, using different materials.  All of them were better than the fireplace. (Some fireplace designs are better than others.  The best are shallow and not box shaped.)

The best wood stoves have big doors.  It’s a pain to have a wood stove that can only accept small pieces of wood because that’s all the door will allow.

It’s also great to have a damper in the chimney/flue.  A damper is a valve.  You can shut it when you aren’t using the fireplace.  This way, the vampires (and Santa) won’t be able to come down your chimney.  Along with bats, birds, bees and cold drafts.

There should be dampers on the stove itself.  These valves allow air into the stove.  Remember that a fire needs fuel, heat and oxygen.

Some wood stoves have glass windows.  I dislike them, but own one right now.  The glass is a pain to clean.  Also, the glass could kill someone.  Let’s say you have a chimney fire and you need to dump water or snow down the chimney.  That water may make it all the way down to the stove.  It will turn to steam and could break out the glass.  This could kill or maim.  Steam is not our friend.  However, this will not happen if you maintain your wood stove and chimney.

Fancy wood stoves have blowers.  They blow air around the stove and into the room, heating the air faster.  This is a good thing.  It’s noisy and uses electricity though.  You can get fans that run on heat and stick them on your wood stove.  Look up stirling fans for this.

There’s usually a door seal that looks like a white, shiny rope.  Check it once in a while.

So, you have a wood stove.  Some competent person installed the pipes/whatever to get the exhaust safely out of your house.

What are you going to burn?  This isn’t the time to say “wood, duh”.  This is a moment when you look into the distance, squint your eyes a little, purse your lips and pontificate about the particular tree species you like to rapidly oxidize. 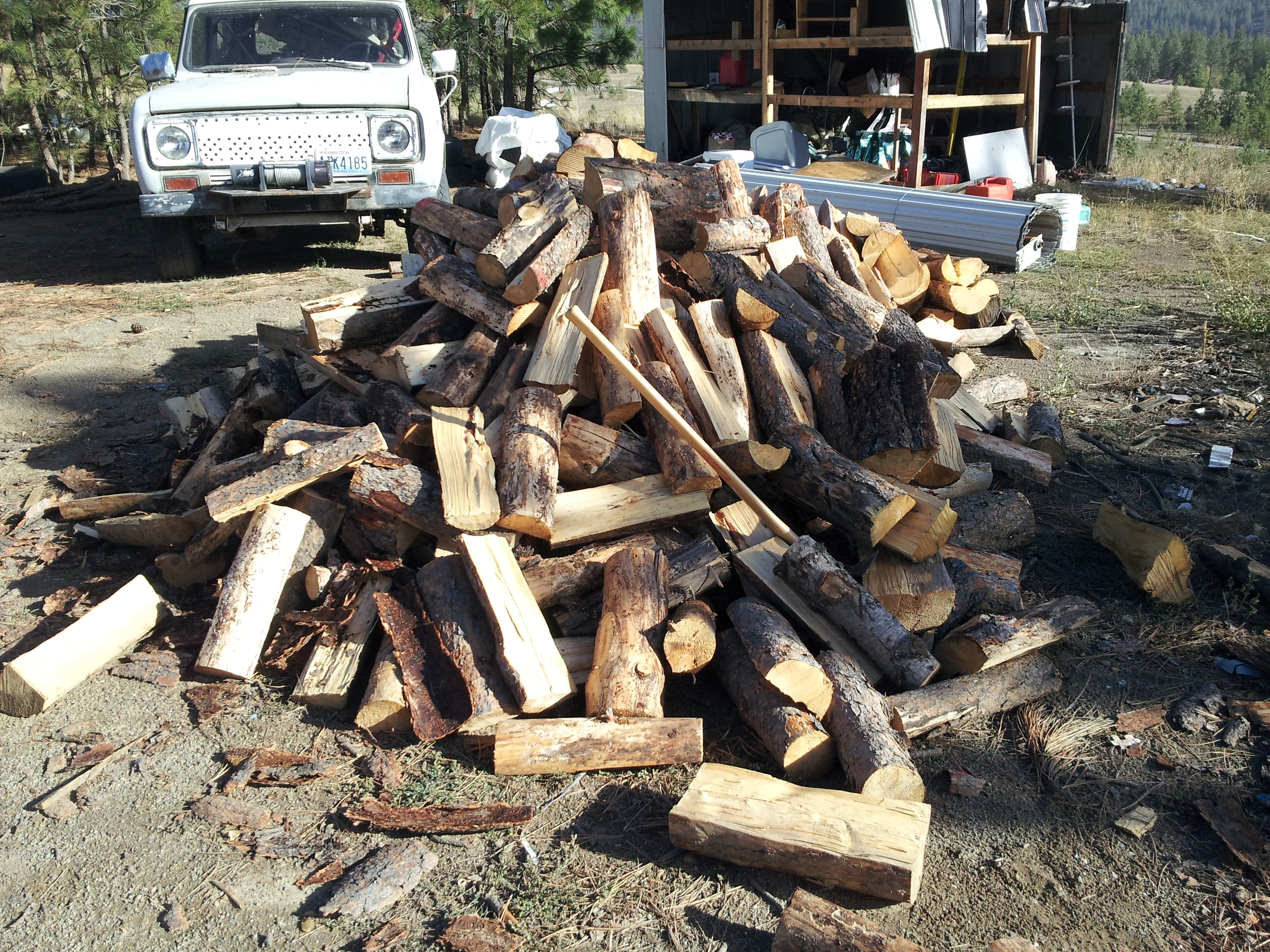 a cord of pine, fir and tamarack

The first thing about fire wood to know is whether or not it is “green”.  Wood is either green or seasoned.  Seasoned wood comes from trees that were cut down a year or longer ago.  Seasoned wood is a good thing.  Green wood burns less efficiently, is harder to light, harder to split and leaves more deposits in your stove and chimney.  More about those deposits later.

The next thing to know about your wood:  hardwood or softwood.  Hardwoods burn longer and deposit less but are harder to start.  Softwoods burn hot and are easier starters, but don’t burn for as long.  Some hardwoods are very difficult to burn.  You’ll need lots of heat to consume them.  I’ve had difficulty with plum, dutch elm and russian olive.

Softwood is wood from trees that grow really fast.  Pines, firs and the like are softwoods.  Tamarack is my favorite to burn.  It’s a kind of larch.  Many opine that burning a mix of softwood helps keep the deposits down.  I’m not an expert, so I won’t state that.  YMMV.

It’s important to understand that softwoods are especially bad at leaving combustible deposits behind.  In your chimney.  Bad.  It’s worse if you burn green wood.

Stack your split wood by alternating the orientation of each row. This speeds seasoning.

I don’t have the engineering degree to describe the dynamics of a chimney fire.  I can tell you that a chimney fire is a jet engine.  No lie, no exaggeration.  The fuel is creosote that has built up within the chimney.  Because hot air rises, the chimney starts pulling in air faster and faster.  This air comes from the stove.  The jet exhausts blasts out the top of your chimney.  You can see the flame if you go outside.  Yikes.  I’ve seen chimney fires.  Luckily I haven’t had one happen to me.  Let’s avoid this.

1. Clean out your wood stove.  It’s going to fill up with ash.  The dampers will get covered, life will be sad.  I recommend at least twice a week if you’re burning all the time.

2.  Burn a creosote cleaner of some sort, even if you’re burning hardwoods.  You can buy them at big box stores.  Follow the instructions.  You may need to do this several times in a season.

3. The bigger the piece of wood, the harder it is to start.  It takes more energy to heat up a big chunk of wood, so it’s harder to light.  Start with some paper and twigs or thin pieces of wood, building the fire to the point that in can take a big piece of wood.  Or use a torch.

4.  Open the dampers when you start a fire.  You have to open the chimney damper if there’s one or you’ll end up with smoke in your house.  Open the stove dampers so your baby fire can get oxygen.  I leave the stove door cracked open.  This allows the fire to draw in air in such a way that it acts as a blower on the fire.

Note: It may take a while for the chimney to start “drawing”.  A chimney draws smoke out of the house.  To do this, hot air needs to find its way up and out.  This takes a bit when the stove is cold.

5.  Get the stove really hot.  Do this by using small pieces of wood and burning with the dampers wide open, perhaps leaving the stove door cracked open.  I’ve had the room get up to 90 degrees doing this.  The point is to burn up some of the deposits that may be accumulating.  I recommend doing this once a month at least if you burn all the time.

6.  Get the equipment and clean (sweep) your chimney.  Or pay someone to do it.  Or get good fire insurance.  Do it in the fall before you start burning.  Do it in the spring when you’re done burning.  A lot of people go years between sweeps, especially if it’s difficult to get to the top of the chimney.  Just be careful.

I really want you to understand that there’s a significant danger if you don’t maintain your stove and chimney.  You can make an engine run off the smoke of your wood stove fire.  Seriously.  Don’t let the creosote accumulate and burn your house down.

One thought on “How to Burn Wood in a Wood Stove”