The title really should be “Observations about Electric Fencing at Soil Born Farms“, but that’s really long.  Maybe I should call it “The Longest Rambling Post I Have Ever Produced”.

My apologies ahead of time for slow loading times.  There are quite a few pictures.

Remember Pork Chop?  I met this Guinea Hog the first time I visited (link).  I had been surprised by the electric fencing.  I was a bit bashful about grabbing onto it in front of others, but I wanted to know how much juice was going through the poultry netting.

Here’s a reminder pic of our swiney hero, taken today… 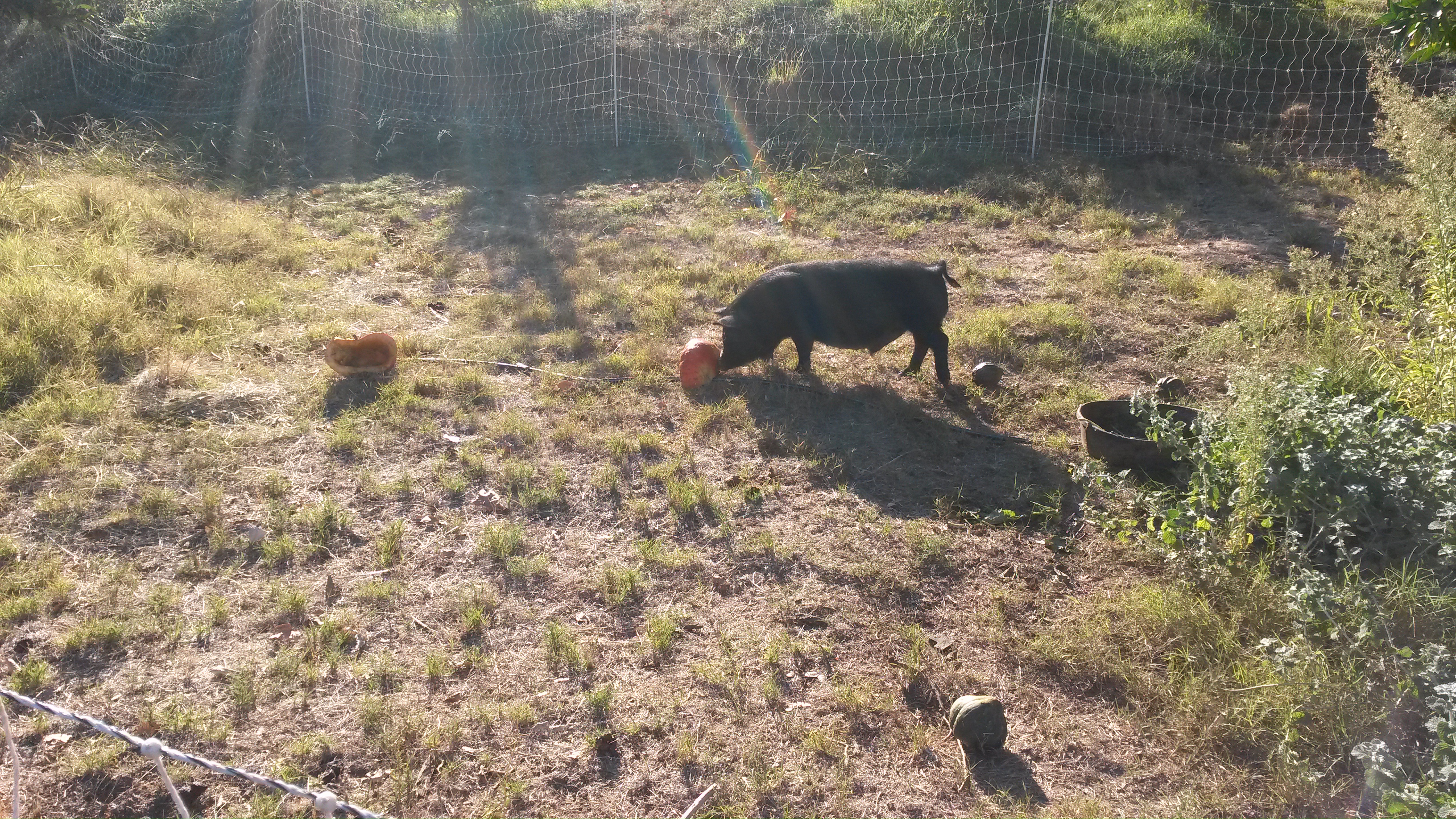 Pork Chop playfully pushes a pumpkin with his proboscis.

The fence seems to be about 160 feet long.  It’s touching the orange tree, it’s sagging everywhere, especially along the bottom of the netting.  I’m not criticizing, just explaining the state of affairs.  Obviously, Pork Chop isn’t getting out, so it works.

Before I get to what happened, I need to point to another blog. (feel the tension building?  What happened when I touched the fence?)  The blog post I want to refer to is http://sugarmtnfarm.com/2012/04/19/fencing-2/ .  Walter discusses testing electric fences.  I want to borrow from his table of pain.

Please read his post even though I’ve posted his table here.  It’s a much better post than this one, so you won’t feel like you lost precious minutes of your life here.  😉

So, I look around to make sure no one is looking as I reach toward the fence.  There are a few precautions to take before you attempt to gauge an unfamiliar electric fence.

OK, the above list is overkill for poultry netting, but once shocked twice shy.

Some of you are shaking your heads.  Bumping an electric fence isn’t a big deal you say.

So, let me regal you with a tale from my youth before I talk about touching the poultry netting that keeps Pork Chop (PC from now on) confined.

It’s the summer between my 7th grade and 8th grade year.  I have my first real job, moving hand line at a farm/dairy.  This is irrigation pipe.  See pic below… 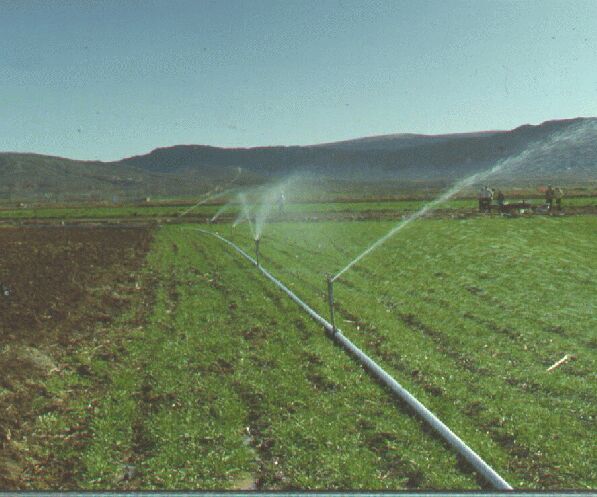 My job was to shut off the water, move the line of pipes to the next valve and turn the water back on.  I did this with a friend of mine.  We did this in alfalfa and barley fields as well as pasture for the dairy cows.  We did this twice a day, morning and evening.

The pasture was surrounded by electric fence.

One cold morning finds me moving pipe in the pasture.  Technically it was morning, but it was pitch black.  I was galumphing around in my irrigation boots, moving the line.

(BTW, to be cool, don’t get rubber boots that only cover your calf, get the ones that go all the way up your legs.  Pull the tops of your boots back down over the boots until the fold is just above the knee.  This is like rolling the cuffs of your jeans, only the cuffs go down instead of up.  The effect is swashbuckling.) 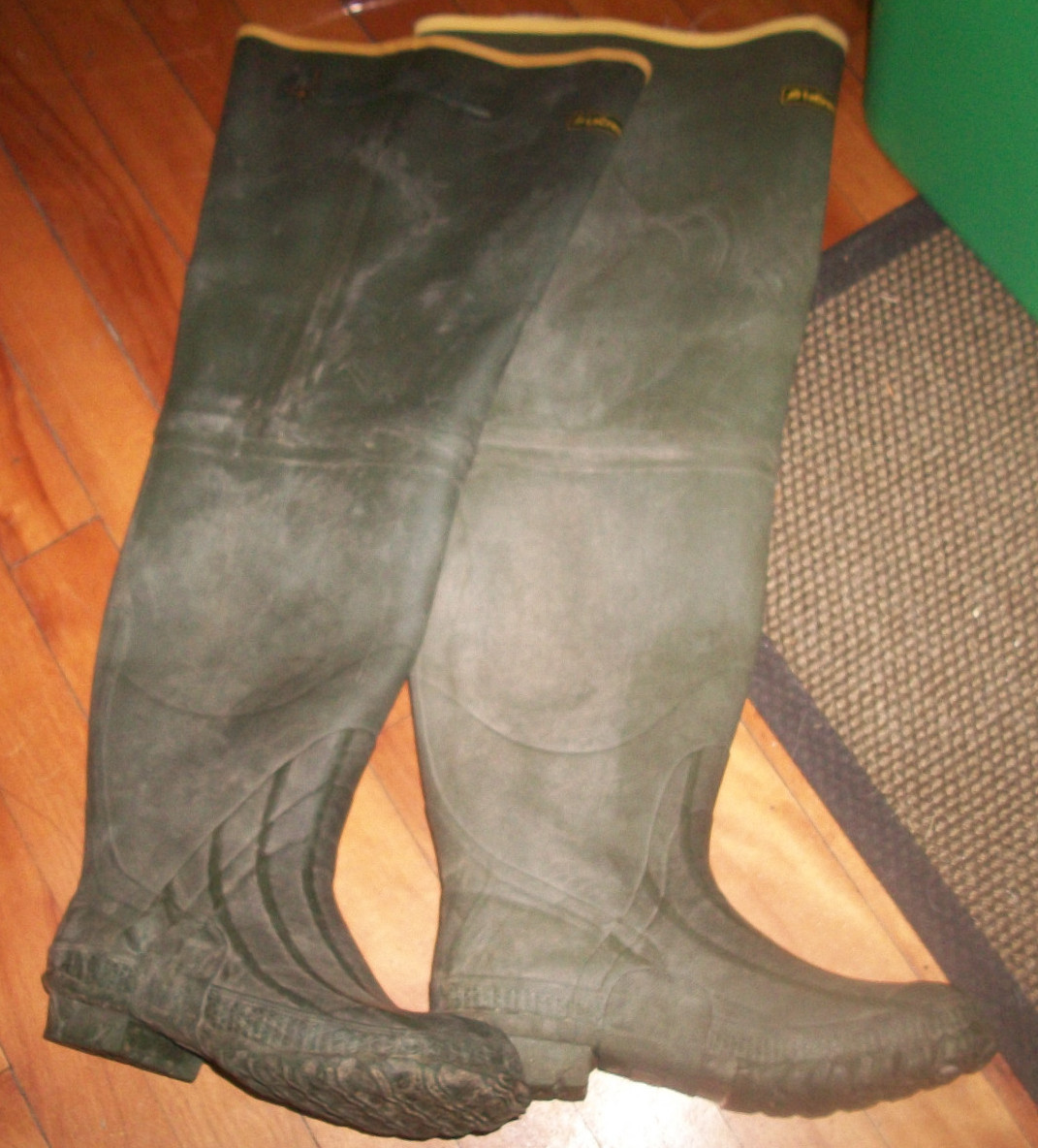 Real irrigation boots, not cuffed though

So, the air is cold, the pasture is cold and I’m soaked from the waist down.  This leads to the inevitable–I have to pee.

In the country, it’s okay to pee outside.  It’s one of man’s inalienable rights.  I didn’t have any problem with this.  The problem was that the farmer had lots of kids and some of them were daughters.  Cute ones.  One was in my grade.  I wanted to make sure no one saw me.

Walter, if you’re reading this blog, you know where it’s going.  That’s a pun.  Deliberate.

I sidled up to some taller grass and began my business.  Remember, I’m soaking wet.  I might be wearing rubber boots, but I’m covered in water.  My boots are covered in water.  I’m conductive.  And my stream hit the fence I didn’t see.

Life changer.  People thought I got a perm that summer.  Well maybe I did (see cute daughters above), but I always had a curl in my hair (until most of it disappeared) after that.

It was a defining moment for me.  I had experienced the most painful moment of my life to that point, and it was to a certain place.  I’m a 7th grade boy.  Things could have tipped either way, I could have cried and called it a day.  But I didn’t.  I manned up and continued to work, with a grimace on my face that has never really gone away.

So maybe you can understand why I’m careful around electric fencing.  That’s right, I’m actually back on subject.

So, I reached out to Pork Chop’s fencing and pressed the back of my hand against it and waited for the Zzzt after the Pause.

Was I insulated?  No.  I had wandered through some wet grass and my shoes were soaked.  (later on, I validated this by getting a shock from a different fence (deliberately))

I put the back of my hand on the hot clamp.  Nothing.

Maybe there was an issue with the ground rod or maybe the fence was grounding out.  But there wasn’t any juice.

I went to visit Pork Chop’s relations after this. 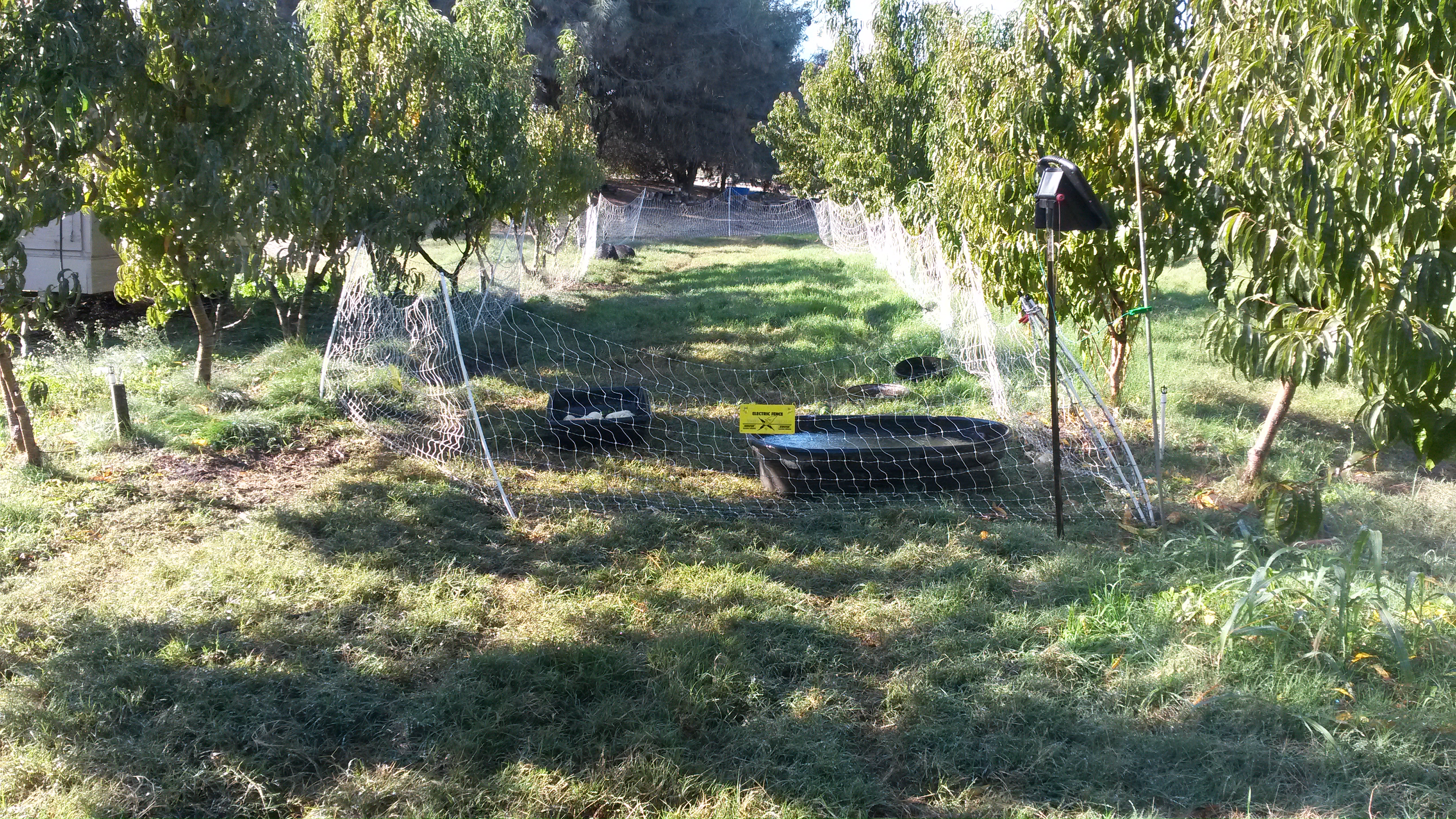 I don’t know if you can tell from the above pic, but

It’s a lot of water too.  I didn’t bother to check for juice. 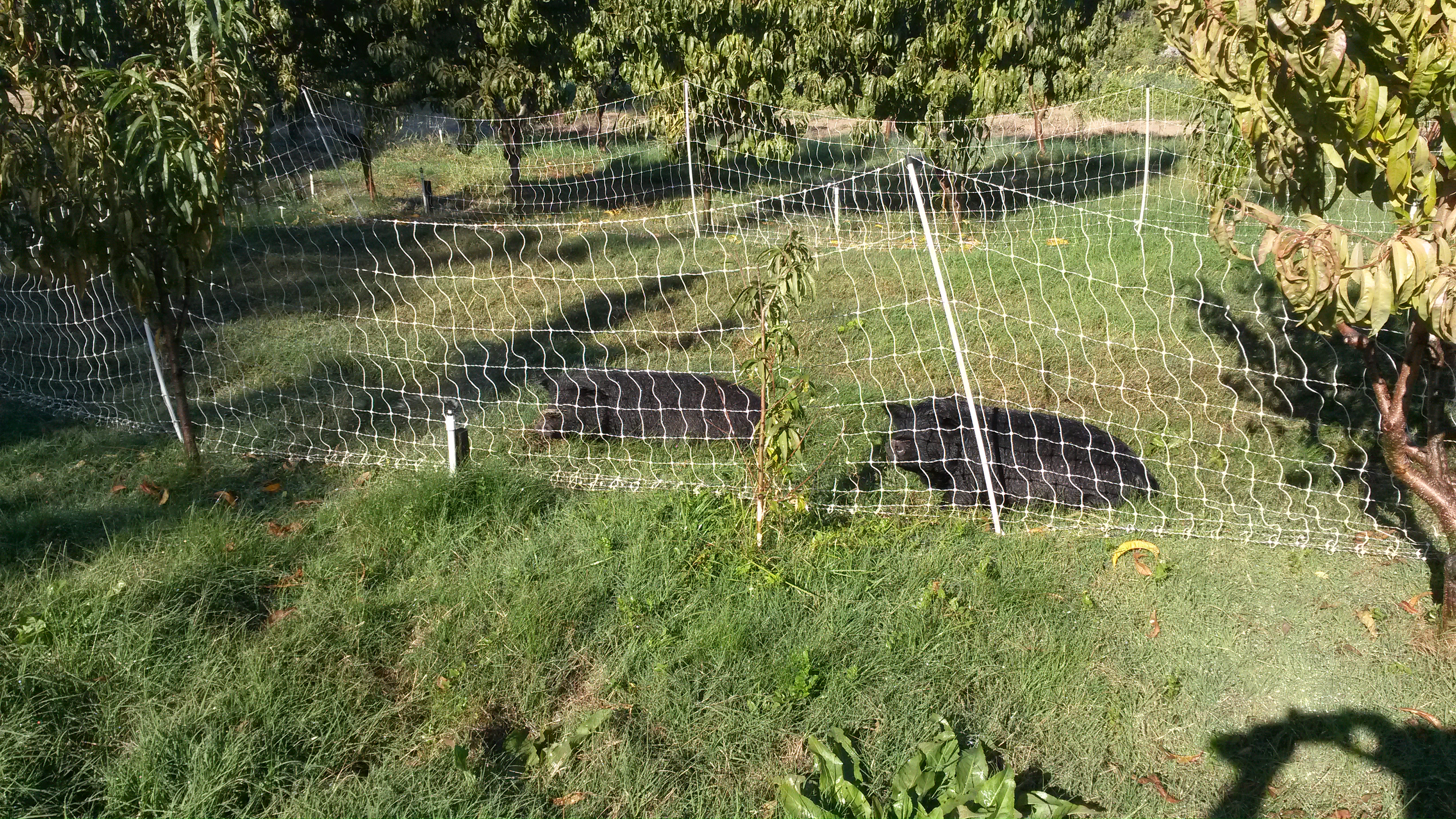 See the white pipe coming out of the ground by the fence?  It’s a sprinker and it’s running.

PC’s sisters (I didn’t ask their names) had a choice between sprinkler with shade or sprinkler with sun.  They chose sun.  I moved on.  Truthfully, I was kind of cranky.  The pigs didn’t seem to mind, but they should be able to get out of the water.

I went to see PC’s parents next. 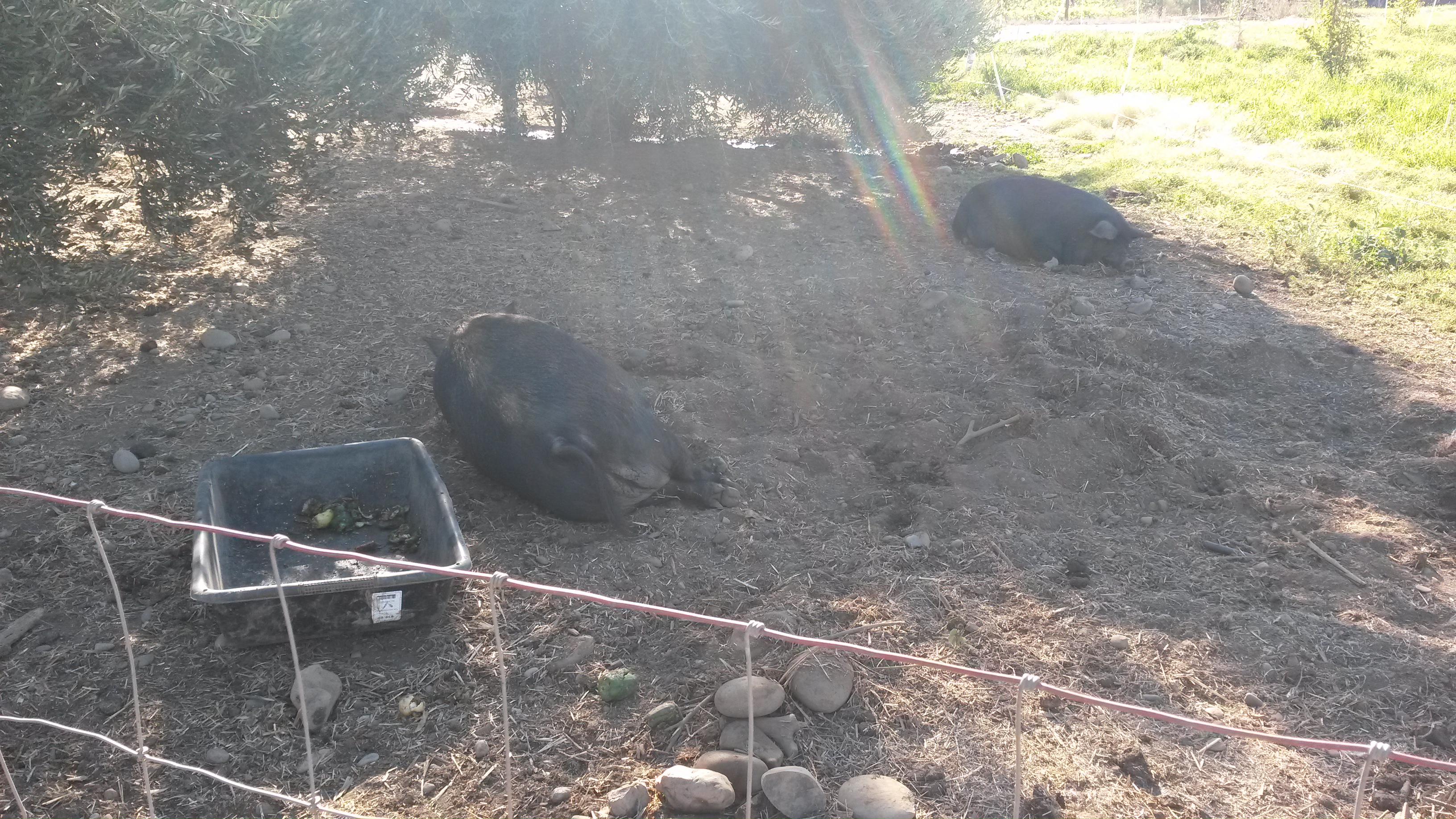 These two were held in by non-electric fencing on two sides.  The third side was a strand of electric fence about 8 inches off the ground.  see below. 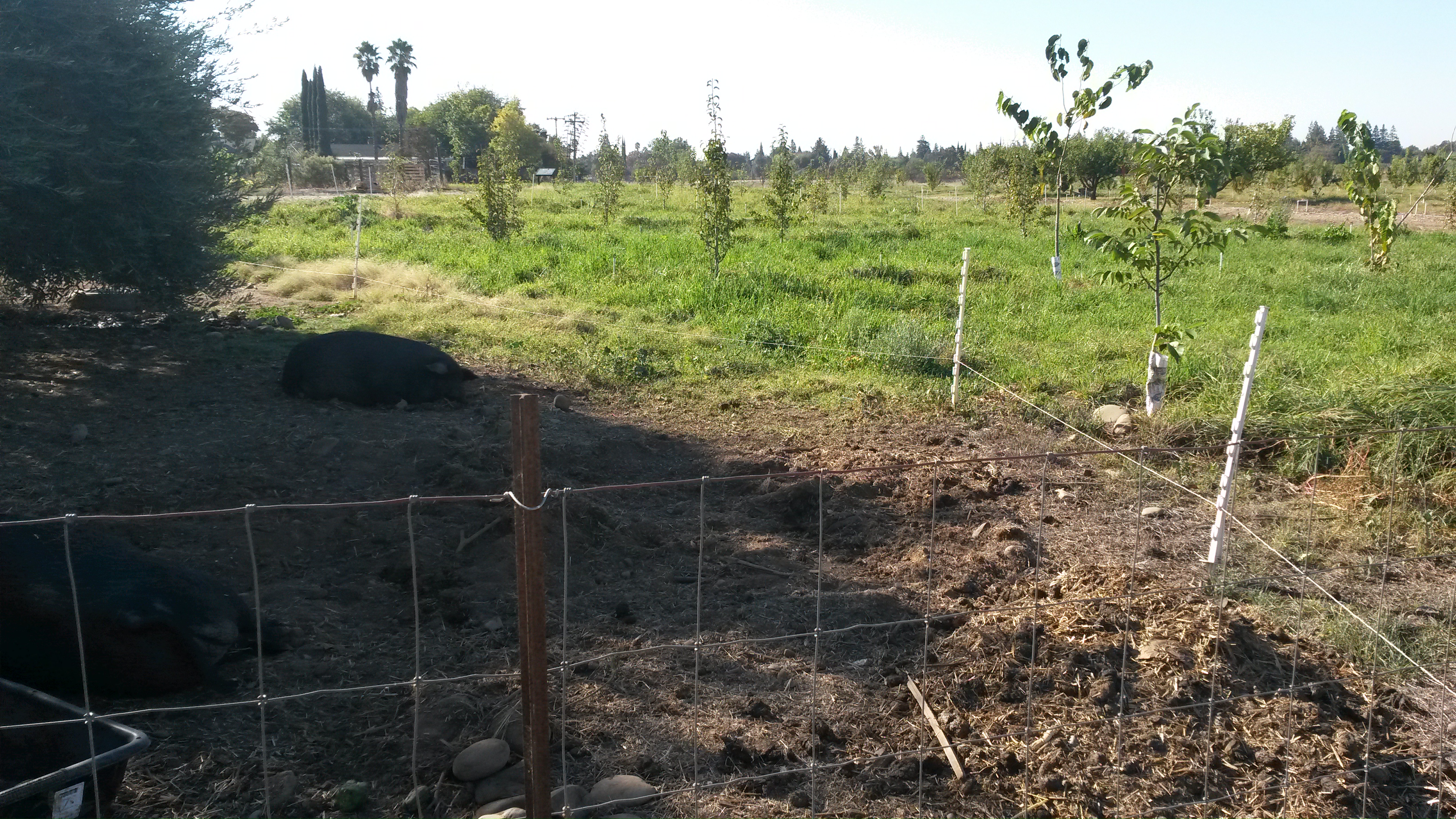 The electric was out of reach, so I didn’t test it.

I could see more fencing in the distance.  It looked like two cows with their calves.

(BTW, I’ve never heard anyone who had cattle say “calves” unless they were using as a verb.  Pigs farrow, cows calve and humans, uh, go into labor and have babies.  What I hear is calfs.  I don’t really care about the grammar, I’m just offering an observation.  And don’t tuck your jeans inside your cowboy boots.  That’s for goat ropers and city slickers.) 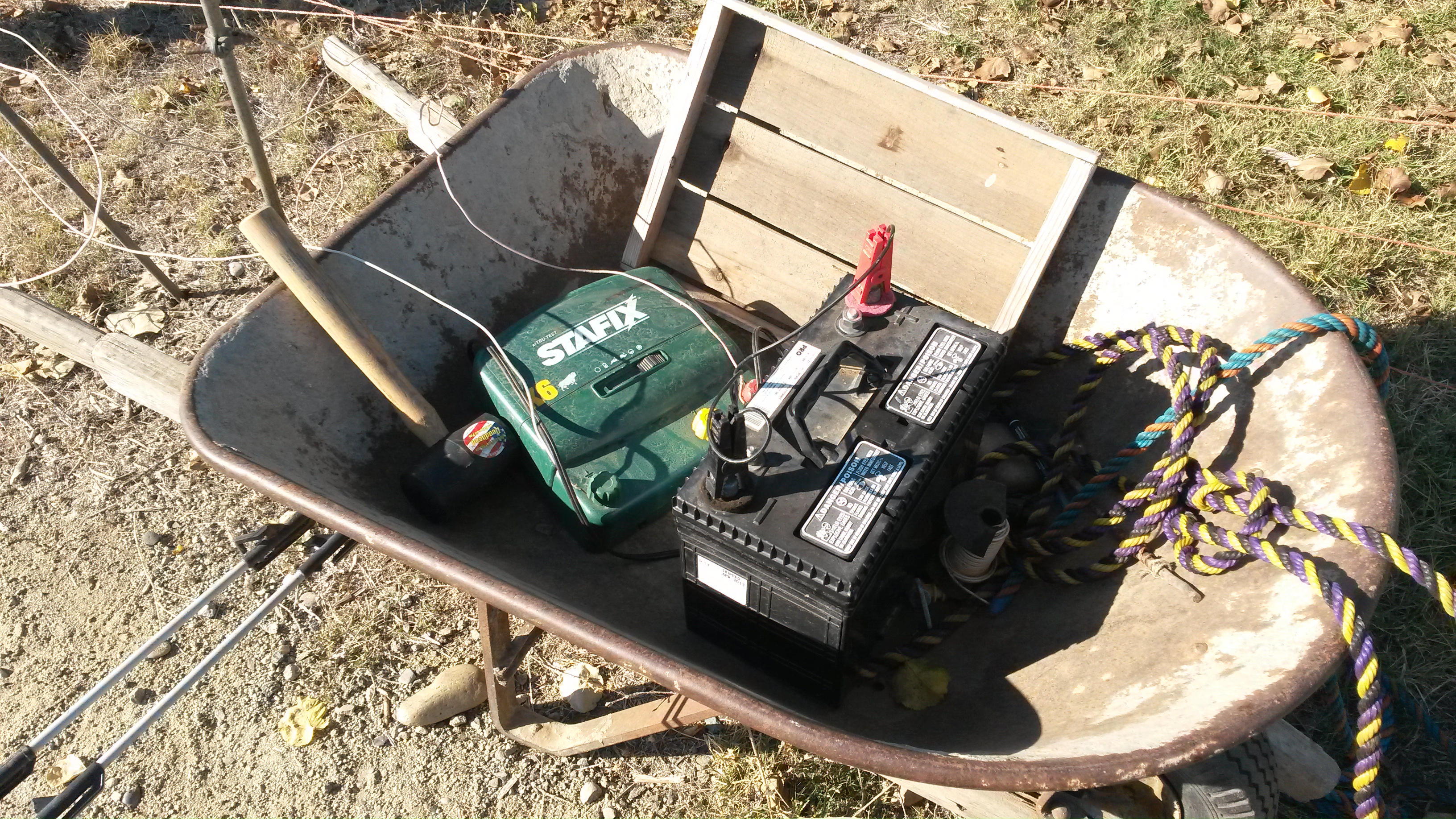 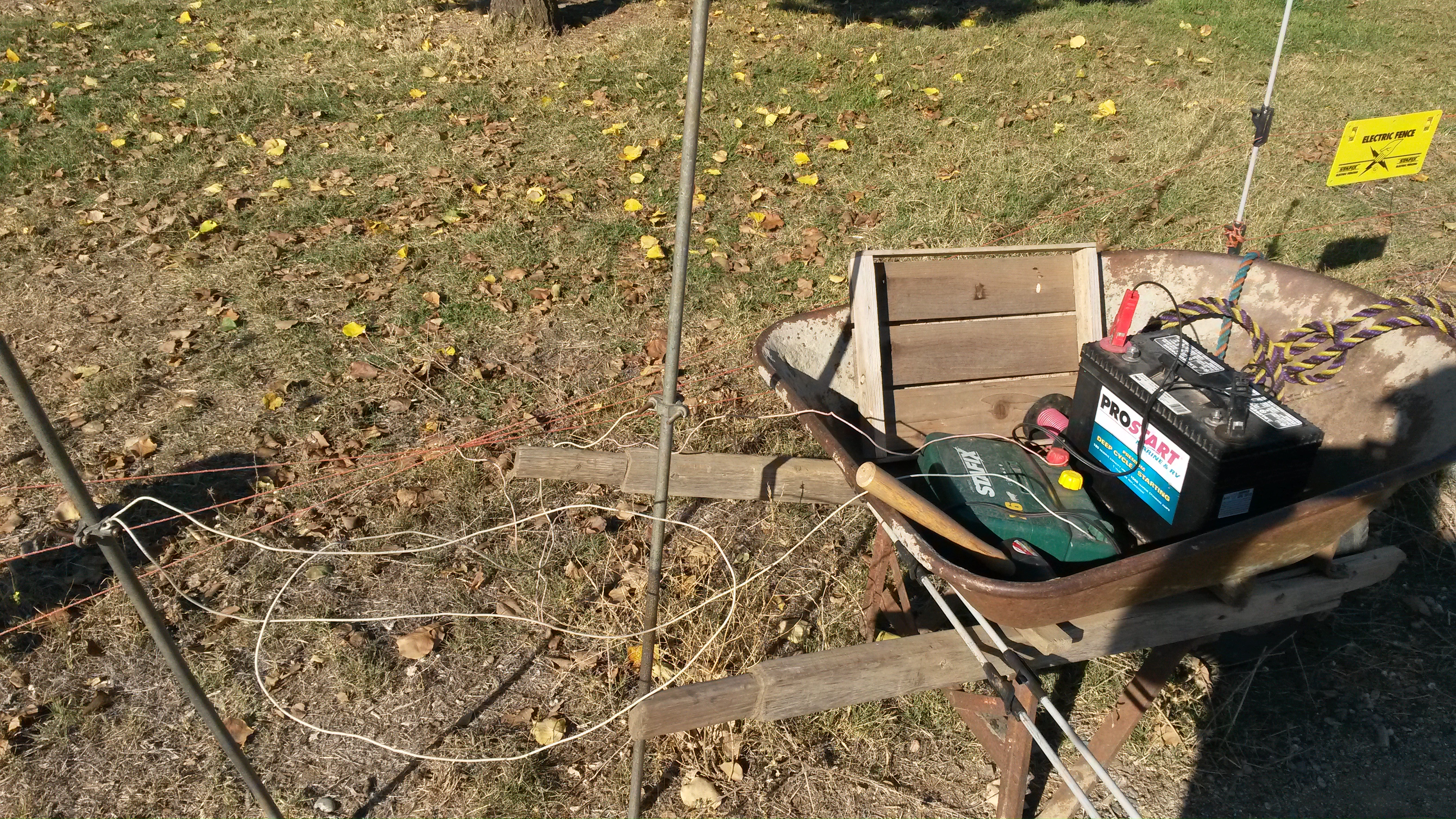 It’s hard to see here, but there are 3 strands of polywire.  They are hot.  I bumped the wire and felt a tingle.  This is a pop of about 1 on Walter’s scale.

Below, you can see white polywire.  This was used to create small paddock.  It’s laying on the top hot wire. 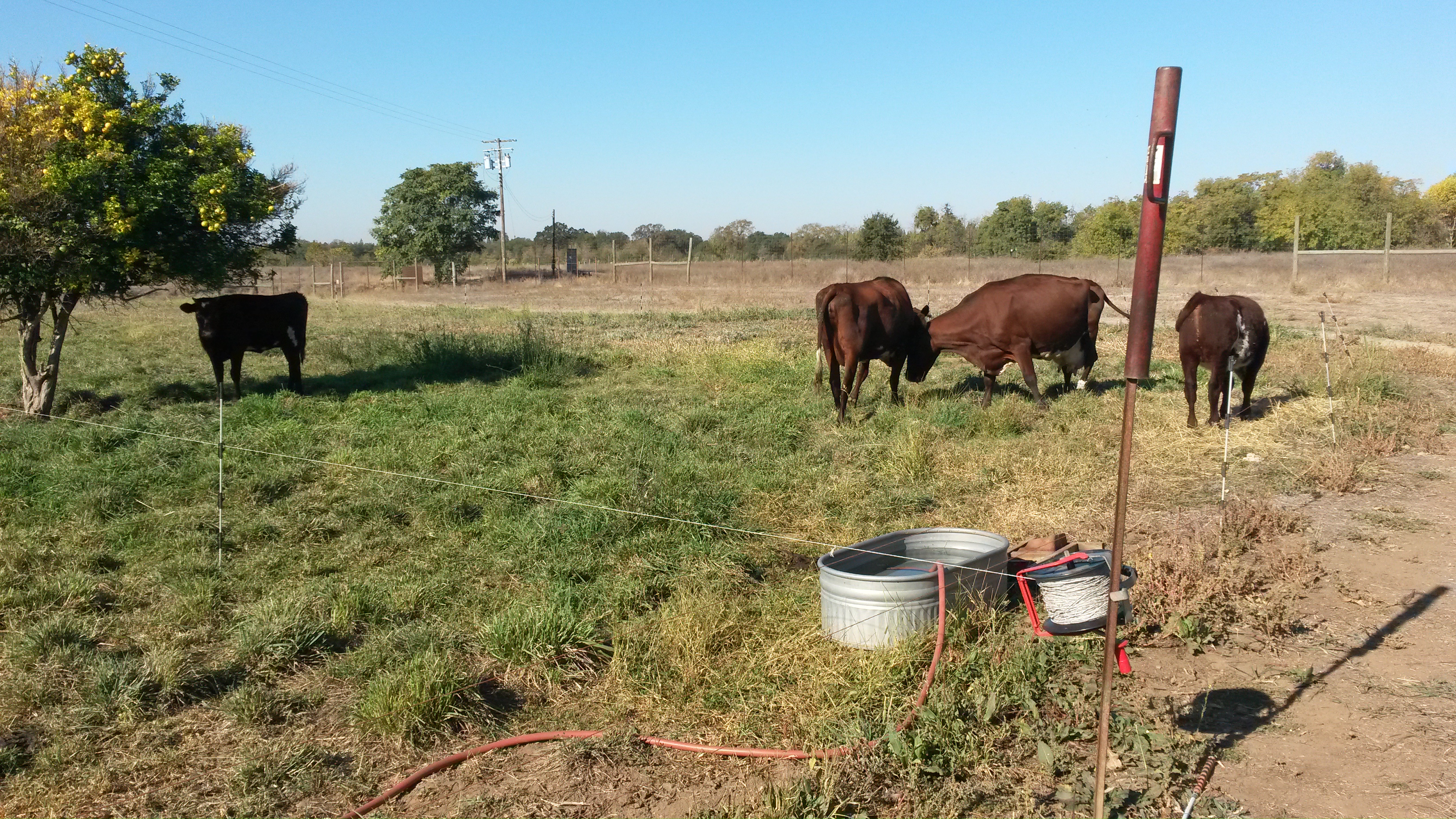 You can draw your own conclusions.  I don’t know if there are issues with critters getting out, but I would want more pop than I found with these fences.

3 thoughts on “Observations about Electric Fencing”