December 6th was bitter cold. We were in a wind storm advisory with wind chill at something insane like -20. Our oldest-at-home daughter was turning 18 the 7th so some friends from school were having a birthday party for her in town. The youngest was spending the night with friends and I was enjoying having the house to myself and the dog. I had a great fire going, catching up on laundry etc. I was talking to JS when the electricity went out. We decided I needed to fill up all the pots/pans/buckets I could with water while I had the well available and then bury under the blankets (also advised older daughter to spend the night with friends if she could). I tried going online with the phone in the windowsill (not a joke, if the heavens align just right, we can make calls and get some internet via our phones if they are placed just so in certain windows) to our power company, but they couldn’t recognize my address or JS’s phone number and since HE pays the bill, I have no idea what the account number is.

Next morning…BRRRR! I’ve never slept in a hooded sweatshirt with the hood on my head before. We live in a very poorly insulated single wide that is missing much of the skirting. The next morning I got up and jumped in the car. Once I got the heat going, I drove around to warm up and checked the neighbors…everyone had outdoor lights but me. hmmm. I send him a text asking him to notify them of our outage.

Our oldest-at-home daughter comes home about 10 am-HAPPY BIRTHDAY! You are going to freeze your tuchus off.  Power guy finally comes rolling up and I go out to meet him. I asked if I was the only one that had an outage and he said yes, let me show you something. He walked me over to the power box outside. Now normally, with our old electricity provider in Eastern Oregon, this box has a big lock on it, a tag, and says you will be prosecuted for touching it etc. Mine isn’t even locked and guess what? It has 2 breakers on it. One had flipped (probably from my vigorous house cleaning/baking/electricity running). He flips it and says, that’s all you have to do. The birthday girl and I are very excited (and feeling stupid) until we realize no water. Yep. The pipes froze. JS says, just go on in to town and do her birthday stuff and then see if they’ve thawed by time you get home.

Oh they thawed all right. Because they busted all to smithereens (ok, not quite at that point but once I got through with them). The hubby, my knight in shining armor, was in California. It was up to me to remove what skirting that was up and then crawl under. I made a kid crawl under and take pictures. She e-mailed them to dad and he sent me back a list of supplies to pick up at Lowes. She didn’t take down the skirting though so the lighting was really bad. So some of that changed but for the most part, I became a PVC girl (a friend was going to town and offered to bring me the parts, but wasn’t able to get them so it cost me another day).

Wednesday morning, armed with saw, knife, elbow grease (and all out of tears from pouting and feeling pretty stinky from only taking cat baths), I crawl under the house and saw off my first hunk of PVC. FROZEN pvc . It was a corner piece so I cut off both ends around the elbow, about 1′ on one side and 6″ on the other. Went inside, did my glue on the ends I could and then took the new piece out and did the magic there. Let it cure and turn on the water (turning it off was another different fiasco all together!) and eureka! No more leaks…there. But wait! There’s one at the pipes coming out of the house and another near the shut-off valve under the house.

Well day 1 work is done because it’s freaking cold and getting dark outside. Next day I start on the side by the valve. And it is so jerry rigged that someone put PVC in a brass fitting. WTH? So JS says well take a wrench to one and the channel locks to the other an turn them against each other to loosen it. Yeah…that ended up busting the PVC off INTO the brass coupler. I took a picture and called him back (crying) and said This is what happens when you make me mad. I break PVC in 2. haha not really funny, but kept me from getting hysterical. So then I get to play with a propane torch and melt that bugger out of there. That part was kind of fun-I am a bit of a pyro (except my rear end freezing on the cold ground). I got it out, and went to the store for THAT part. Ended up being that I needed a 1″ reducer to a 3/4″ (a bushing I guess in real terms). Got that home and used the plumbers tape, screwed it in and then realized I should have done that part last. Oh well, I MADE it work. Then didn’t let it cure long enough because when I turned on the water an hour later, the bastard blew apart. Day 2 done. 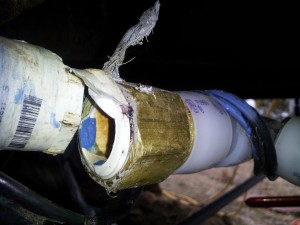 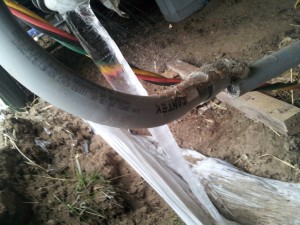 Day 3 I was up early, had those parts to replace, along with a slew of tools around me (I got pretty good at sliding my big butt under the house-my Carhart survived with no tears or rips-they get an A+) and got that part taken care of. Then I headed back to the other side of the house to get the other half done. That was a good deal harder as it was on the pipes sticking out of the house AND, I couldn’t quite get to it because where the skirting didn’t reach, we’d had the girls shovel dirt up to act as a block. Well, it’s a frozen block of icy dirt with sharp edges.  The girls get home from school and I’m still struggling with that side (and my hip was on a pile of ice) so I drag the youngest down to help me. She didn’t pay attention to the elbow needing to be turned slightly to reach the long end so we had to get creative there. We were also heating the pipe ends with the blow dryer to keep the ends hot for the glue (it was freezing before we could get the pipes together it was so cold).

Go in the house to warm up, cure time is up…hubby is on his way from California and turn on the water….ALL my fixes held. Girls are doing a happy dance-excited to use our own shower. I’m excited to shower (mind you, this is the NEXT Friday we’ve been toting water in buckets to use the toilet, wash dishes, cat bath etc.) and as I’m putting the skirting back up, I hear it. The sound of doom…more water under the trailer. WHAT?!

Yes, now, it’s under the bathroom sink. The pipes attached to the on/off valve under the sink are split. I give up.

He finally gets it to where we can have water again, but no hot water at the bathroom sink yet. We may have to get a new vanity (oh Darn!) because the stupid thing is so pieced together and needs more work than we can get to the way it’s set up now.

Then this last Friday morning, we wake up to no water again. Yes, we have heat tape on the pipes. Yes, I have insulation (water weenie type things) around all the heat tape on the pipe. So WHY?!?!?! Because the breaker on the outlet with the heat tape on it had tripped and because there isn’t anything else except the bathroom plug on that breaker, we had no idea for 2 days. Sigh…Lesson learned, Scentsy warmer is plugged in and on at all times (except when re-tiling and that is a new post haha).

Our local little store (15 minutes from the house) had the fittings I needed, and the old guys there for their coffee had plenty of advice for the little girl buying the wrong size fittings (one guy said he just knew there couldn’t be 3/4″ under a house and he knew I’d be back to exchange it-I wasn’t). Anyway, one of the old guys commented that he was real proud of me for even trying this, and that I’d gone as far with it as I could and then he said, let me ask you. Is living out here worth it? I didn’t even have to think about it. A slide show of my pigs and the sunset I witnessed that third night were all I needed to tell him “Absolutely worth it”. Photo of sunset supplied by my neighbor Doug who captured it while I was under the house…

One thought on “Frozen Pipes”