He’s almost 9 months old now and it’s time to harness some of that energy and put it to work. He hasn’t ever been in the same area with a pig without a fence in between them. Earlier this evening I chopped up some vegetables for the pigs, stuffed my pocket with dog treats, and grabbed the dreaded leash.

Bubba came running from the fields behind the house, when I called him and sat obediently while I fastened the leash. I gave him a treat, but he spit it out on the ground which is really odd, because he loves these treats. I started heading for the electric fence and he is not having any of it.  He ended up squirreling out of his collar and thought I’d like to play a game with him.  This was going well.  I offered another treat for his obedience and immediately he sat down and let me put the collar and leash back on.

I had one of the kids out with me to open the gate on the electric fence because I knew I would have to drag him in, and try keeping the pigs out just to get in there, and if something went bad, I’d need help getting out quickly.

Of course, Bubba didn’t want to go but he did obey. The minute we got inside, all three pigs came to Bubba and started sniffing him. Big dog isn’t so tough when they aren’t behind a fence, he sat there practically shaking. Barbie and Abraham started licking him (which I told him was his own fault for rolling around in something foul earlier).  Charlotte however had smelled the cut up fruit/veggies and was trying to attack my bag of pig treats.  I took one out and threw it a bit from me but she knew there was more where that came from and so I ended up giving it to them all at once-2 pears and 3 cucumbers.

Bubba was not having a good time, but it seemed like if I said “Come” and a pig was nearby, he was more than happy to oblige me.  We walked the inner perimeter of the electric fence. Sometimes the pigs would follow and Bubba would try going between my legs. Where is the big ferocious dog that wanted to snap at the piglets a few months ago?

Every once in a while he would sit down as if in protest of walking the pen. I would give the command and he would finally come. The little pigs were more curious of him but still didn’t let me love on them like I am able to do with Charlotte.  (I figured this would get him familiar with them, but also for the little pigs to connect with me more as well). We got about ¾ of the way through and he sat down to protest walking anymore, and put his little butt right on the electric fence. I almost lost a couple of fingers he took off so fast.  Realizing he was trapped, he sat down in the middle of the fenced area (far away from another shock) and waited for me to come save him. I took the leash again and we walked more of the pen but he was shaking and scared and was sticking his head between my feet at every step. I had no desire to be trampled by pigs or fed upon so I had the kid open the gate to let us out again.

Bubba sat down and I tried giving him a treat to reward him but he wanted nothing of it. I took the leash off and he ran straight to the porch.  The kid and I walked over to look at the geese and turned to watch Bubba run down the stairs, go to the treat he’d left on the ground earlier, pick it up, and run back up to the porch as if trying to beat the boogeyman.  This is not going to be easy. Can you breed scared out of a dog? Obviously, he is not exactly a GLD, and probably won’t be. Poor boy. 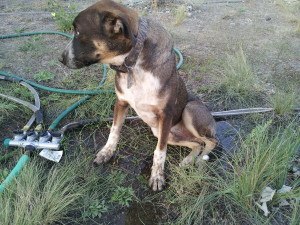 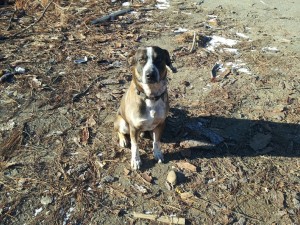