The Delaware chicks are three weeks old.  I’ve learned some things raising so many of them in one bunch.  Here are a few notes about the birds and what I’m learning about raising chicks commercially. 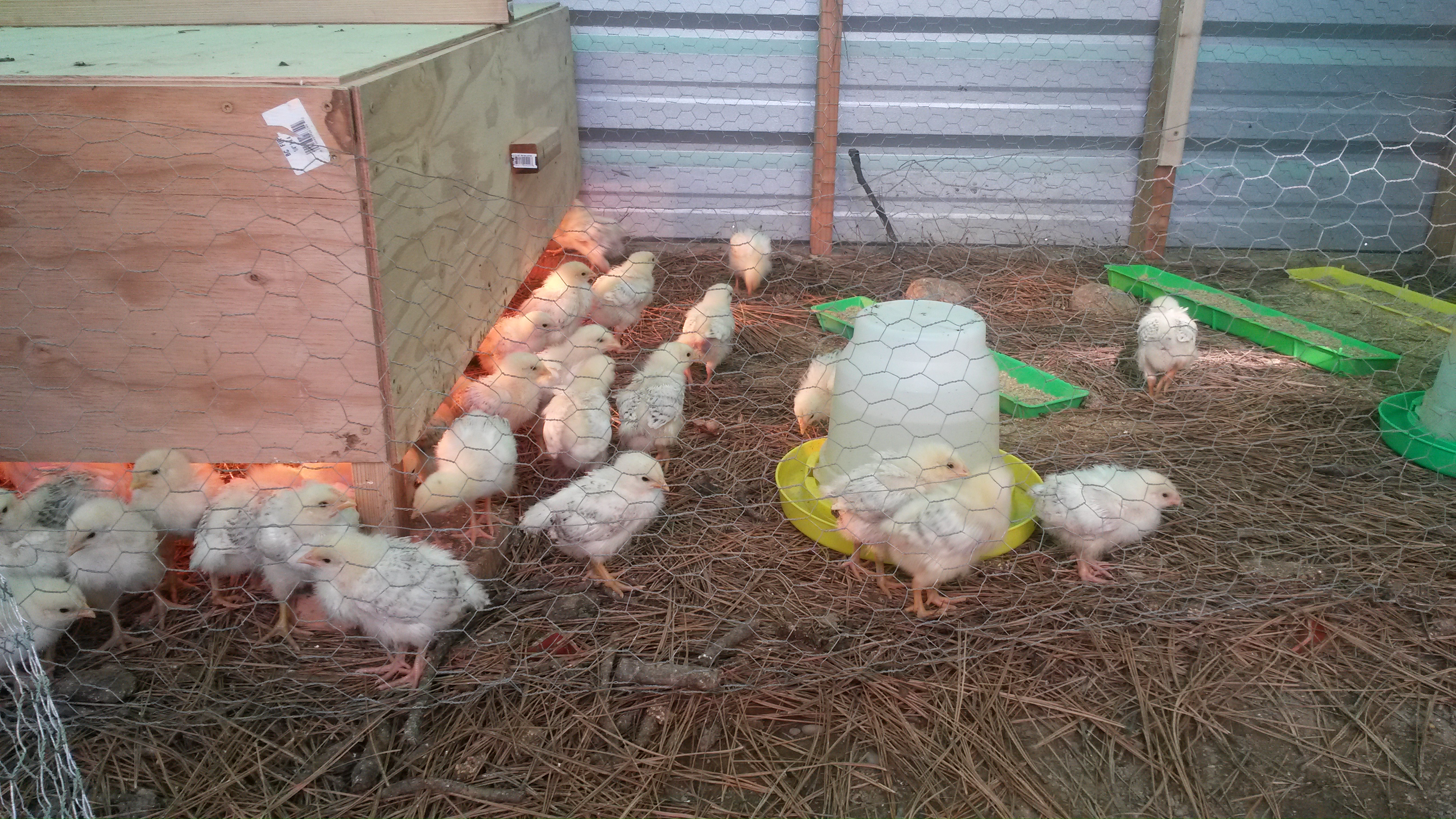 Their wings have feathered and their tails are coming in as well.  Different breeds feather at different ages.  The Delaware chicks have been the slowest that I’ve seen.  On the other hand, you can see a day’s growth of feathers easily.  Incredible.  The Barred Plymouth Rocks were the fastest featherers that I’ve seen.  Orpingtons were somewhere in between.

On a cautionary note:  Heat lamp bulbs are awful.  Keep many on hand.  I had four spares ready to go 4 weeks ago.  I’ve used my last spare.  I didn’t go through as many last year.  These things can fail or even break for no discernable reason.  My greatest fear regarding the lamps may have happened to some friends.  Their barn has burned down.  It contained over forty chicks and some ducks.  I wonder if a broken bulb had something to do with it.

I figure I need at least one lamp working for two more weeks.  You should calculate using heat lamps for six weeks to be on the safe side.

The chicks have gone through almost two bags of starter feed.  I don’t feed them crumbles, which probably would go even faster.  A good estimate is 100 chicks go through a 50 lb. bag of feed every two weeks. My chicks are going to a grower/broiler feed when their four weeks old.

By the way, I have 95 chicks out of the 99 that arrived.  We did a positive count the other day.  I knew we had lost one chick, but hadn’t known about the other three.  This means we’ve lost 4% of our chicks.  I think this rate is really good, especially since the birds had to travel so far in shipping and our “facility” has never been tested.  We may lose a few more to predators, weather and disease, but there’s a chance we won’t.  This is a number I want to improve.  Realistically, I expect 10% loss, so we’re doing well.  We’ll see how hatching our own works next year!

I used pine needles instead of shavings for bedding.  Some people call needles for this purpose “pine straw”.  I think the needles worked ok.  There was an issue we ran into, which I’ll discuss later.  The needles aren’t as absorbent.  I actually think this is a good thing.  Shavings can be soaked and not look like they need to be changed.  It’s more apparent with the needles.  In either case, you need to look under your brooder area, not just outside, where the chicks feed and water.

My previous experience showed that the bedding needed changing around the water areas first.  This wasn’t the case with the needles as bedding, or perhaps these birds behave differently.  The area under the brooder needed changing at one week, and then at the second week as well.

Our brooder area was sheltered, but not on a foundation.  It’s also small.  We received a lot of rain for over a week and the whole floor was moist as a result.  This is something to avoid.  I’d recommend putting something waterproof down before you lay down the bedding.  My next post will probably be about this.

We started out with two food trays and two waterers.  We’re up to three trays.  At least one waterer is emptied a day most days.  This consumption is only going to increase until I get the birds on pasture.

The brooder I built can definitely handle more chicks.  Here’s a link to my post, “Build a Chick Brooder”.  Having said that, I want to have more brooders and raise fewer chicks per brooder.  So many chicks in one area means that issues happen faster.  The bedding gets fouled fast, the food runs out fast, etc.  The brooders are unwieldy as well.  My recommendation is to build the brooders smaller and run 50 chicks per brooder.  I’m going to build smaller brooders this winter.

I went to a small livestock exchange this week.  I could have sold chickens and probably chicks if I had them.  This means a beginning of March hatch, and maybe even one earlier (January?).  I’ve also talked with a local feed store.  There’s interest in buying my chicks there.

Things are going well so far.  I need to build the chicken tractors.  The chicks will be ready for them in three weeks.

One thought on “Raising Chicks Commercially: lessons so far”