We purchased our first parcel here in Washington two years ago.  We purchased a second, adjoining parcel last year.

I look around and see hours of work put into the place, but I doubt anyone else would be impressed.

There’s some fencing.  A garden with a lot of rocks.  A couple outbuildings and a 70’s single-wide.

Things aren’t pretty when you start projects that will take years to bear results–if you’re fortunate.

A visitor to the stead might see some sad looking orchard trees and some puny grapevines.  I rejoice to see that they survived the winter.  So much time was put into cutting terraces in the side of our hill.  We dragged hoses, put up deer fencing, etc.  I’m glad it wasn’t for naught.

I’ve done the numbers and we aren’t going to break even with our pigs this year.  We simply don’t have enough girls and our older boar isn’t getting the job done anyway.  We need more fencing if we’re going to have more pigs.  We’ll get there.

Summer of 2012, we planted some aspens and a few other trees.  We couldn’t keep them watered with no well.  Between the lack of water and the deer, we lost everything but one tree.  That tree might be 6 inches taller than when we planted it.  I’m planning on moving it to a better spot.  None of our garden plants grew either.  The soil was too poor.

Summer of 2013, we planted four trees.  All are alive despite deer predation.  Looks like we learned something.  We also planted grapes, surrounding them with beans as nitrogen fixers.  The plantings were late but we have live vines this year.  We planted corn in 2013.  Some of it might have reached 3 feet high, but there wasn’t enough nitrogen.  More learning.

This year, we have a real garden.  Lots of onions are in the ground.  Fodder beets and mung beens are in nice little rows next to tomato plants.  All of this is in the pigs’ old winter paddock.  It’s well tilled and hopefully well fertilized by the swine.  We’ll see how the plants do.  We’ll add corn, garlic, cabbage, peppers and more.  More learning.

2013 brought us a six chickens.  This year, we have over one hundred.  We got the geese last year too.  That’s a learning experience.  They’ll go away as soon as we pick up another freezer.  Muscovy ducks are in the works.  More learning.

We have a land line now, and Internet too.

Here’s an example of our learning curve… 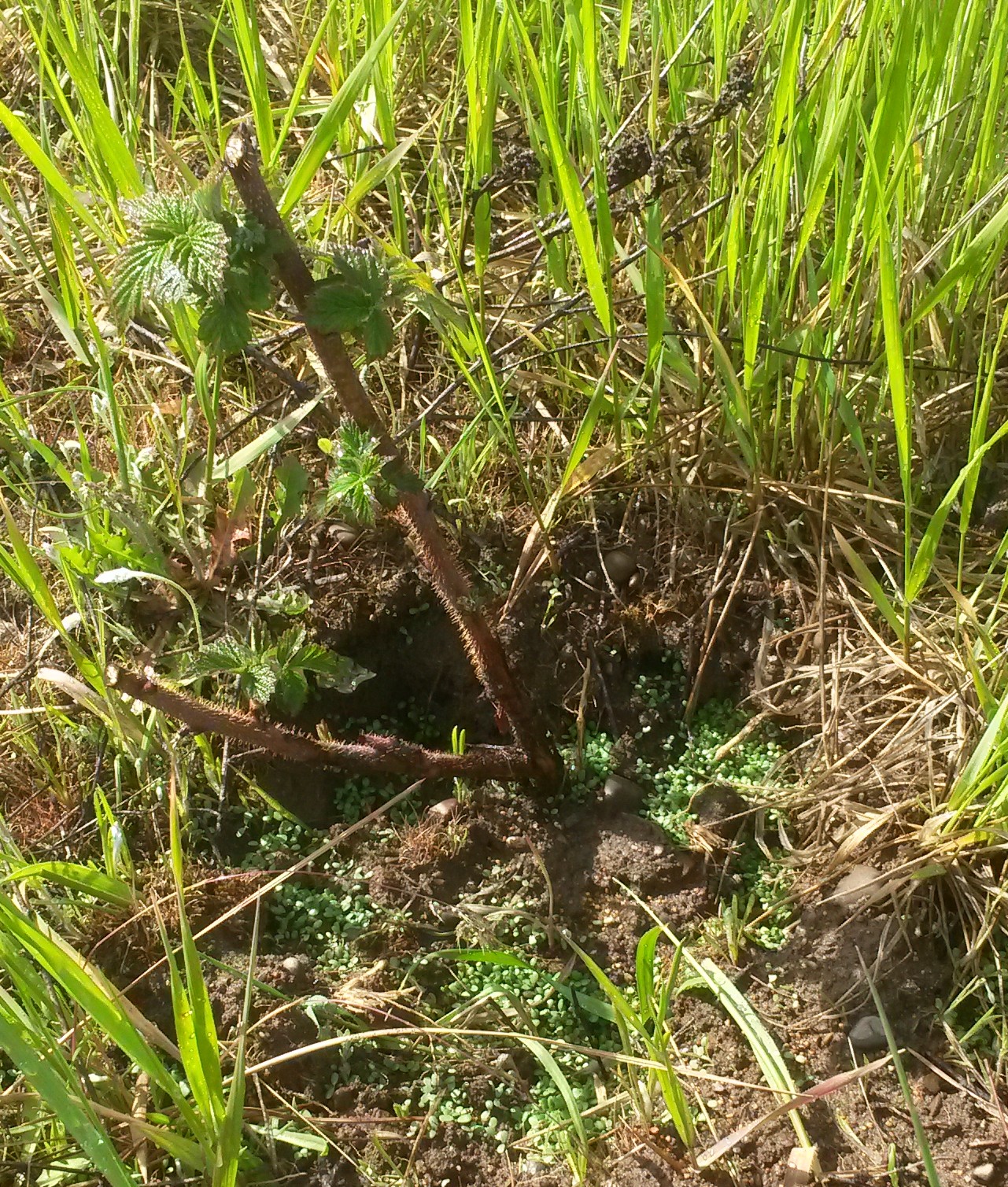 Not much to look at, right?  That’s a raspberry cutting.  See all those little green leaves on the ground at its base?  That’s clover that we’re using as a ground cover (saves water) and as a nitrogen fixer.  See how the grass is yellow/green?  It should be dark green, but the lack of nitrogen means that the grass is starving.  That’s going to change because we’re learning.

So, I’m happy to see the beginning of our third year.  I’m still building on processes that won’t be realized for another year or two, but I see a lot of progress.  Two years has taken us from a bare 5 acre parcel to 8 acres with shelter, electricity, septic, water, phone and Internet.  We have 6 pigs, two of which are pregnant and gobs of fowl.

I think we should have a barbeque to celebrate small changes that are going to add up to big dreams.  See you end of the month!

7 thoughts on “Beginning Our Third Year”