This is going to be one of those posts that contains notes particular to this flock.  I’ll add a few details because I think there’s some value for those who are raising meat chickens or dual-purpose chickens.

The Delaware flock was sixteen weeks old the last week of July.  We weighed the biggest roosters on the 28th, in preparation for an inspection and education.  We’re members of The Sustainable Poultry Network.  Part of the membership includes flock inspection and making sure we’re doing things right.

(note from the future–we ended up leaving SPN.  Here’s a post that talks about why)

Jim Adkins from SPN came out and looked at our birds.  Just so you understand, the Sustainable Poultry Network is about raising chickens in a healthy environment.  This means that they’re in pasture, not locked up in a building.  Further, SPN only supports birds that can breed.  Most, if not all, of the poultry that you get from the store are bird varieties that cannot naturally procreate.  This includes your Thanksgiving Turkey.  So, SPN is all about heritage breeds and improving their genetics. 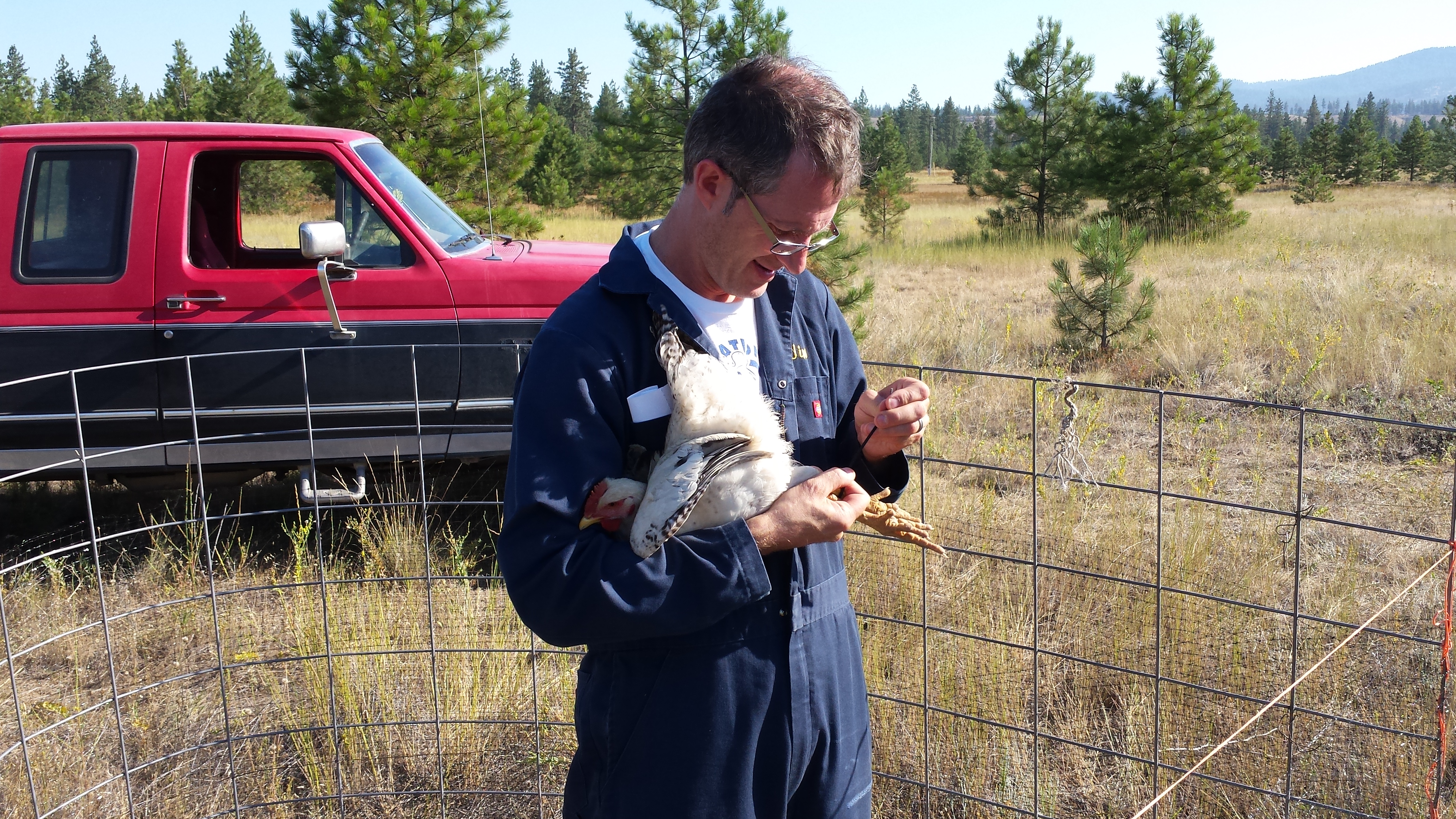 The big thing that the inspection turned up was that our birds were too light for their age.  We weren’t a little bit off either.  The birds were almost two lbs light.  Their size was right but there wasn’t much meat on their breasts.

It’s not that the birds were unhealthy.  In fact, they weighed more than our free-range birds, so I didn’t know there was a problem until Jim inspected.  I’m very thankful for him!

I was flabbergasted.  I had crunched the numbers earlier and calculated that I had been overfeeding them.  This was the last thing that I inspected.  Jim had some suggestions for adjusting the feed.  I figured a call to my feed guy was in order.

The feed guy is great and was happy to tweak the feed recipe.  I’ve also left even more feed for the birds.  They’re getting twice the feed they were getting previously.

I think I’ve figured out what the issue is.  I was pretty unhappy with myself once realization set in.

We have the Delawares in a chicken tractor.  We’re using them as intensive grazers to improve the quality of our soil.  Not much grows well in our soil because of the lack of nutrients.

Because things are so dry at the farm, almost all of the plant matter the chickens have been eating since June is lignified.  This is a fancy word for dried up and wood-like.

Now, chickens can eat lignified plants.  But it’s kind of like you and I eating celery and lettuce.  It takes a lot of energy to break all that cellulose down.  It’s apparent that the Delawares weren’t getting enough feed to both digest the plants and grow big at the same time.  I assumed that the plant matter was a bonus–extra protein, etc. in addition to the feed I was giving them.  I was wrong.

So, we’ve changed the recipe and increased the amount of feed given.

By the way, I didn’t have a good way to hold the chickens for weighing.  I cut off a pant leg from some surplus digis that I have.  There are drawstrings on a lot of military utility pants.  The drawstring end is good for an adjustable opening for the bird’s head.  I asked the wife to sew a loop on the other end for the scale’s hook.  (I’m not a chauvinist–it’s her sewing machine) 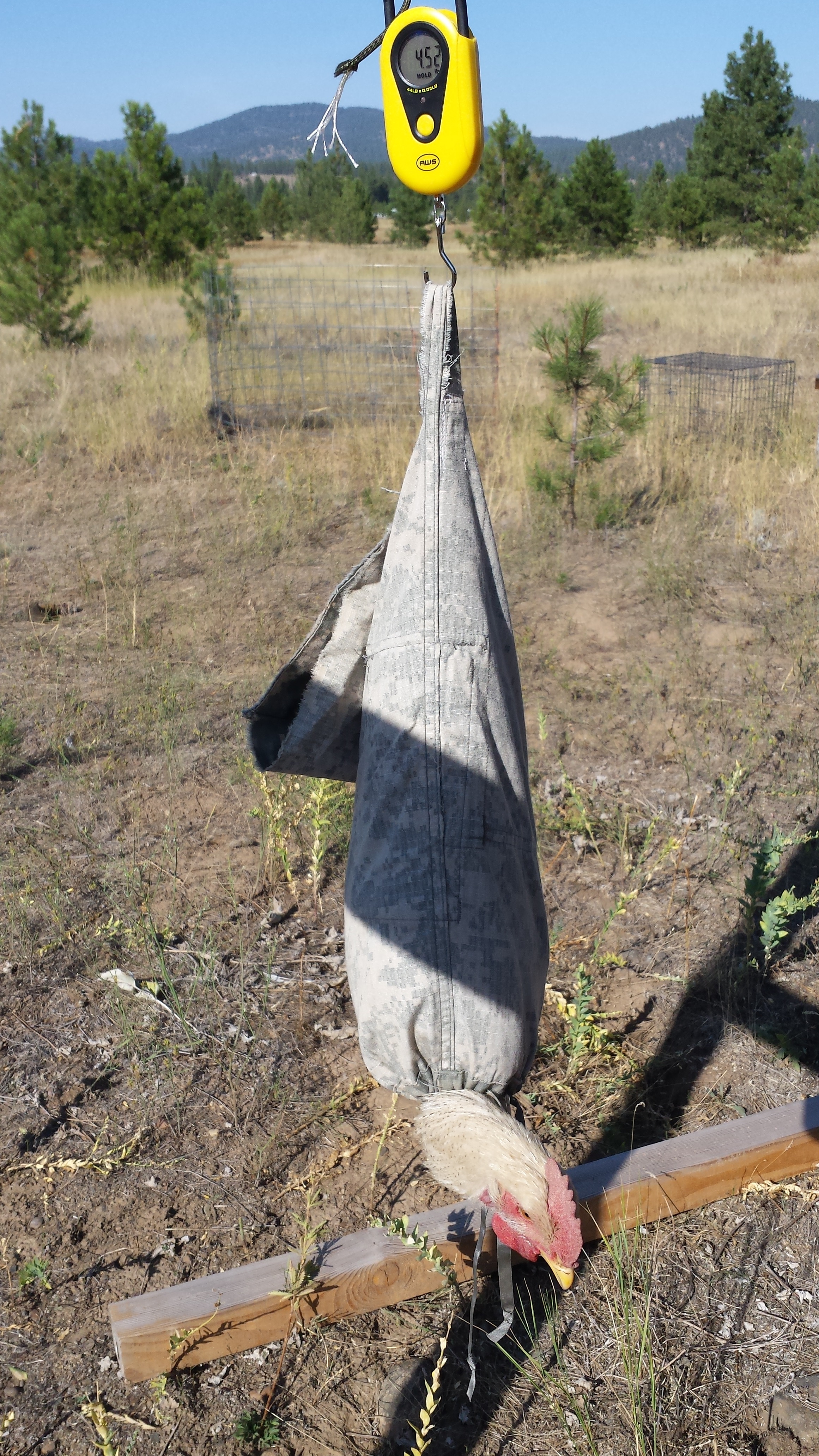 Here are the numbers for the heaviest roosters on July 28th, with the cone weight (.22 lbs) subtracted:

So, it looks like we’re heading in the right direction.

You might be asking what the big deal is about getting the chickens to butcher weight on time.  It costs money, time and other resources to raise these birds.  For each extra day, I lose $6 or $7 feeding them.

The good news is that I don’t expect a meat profit from this flock.  Their purpose is to provide chicks next spring.  Well, the birds that aren’t culls anyway.  The rest will go into our freezer.  But I need to be as efficient and cost effective as possible.  This means that I’ll learn from this and do better next year.

Looks like the heaviest bird (I’m guessing #1 is the same bird for all weights) is done putting on quick weight.  All of the other roosters have put on around 1/4 lb. in a week.  All of the birds should still be 1 lb. heavier at almost 19 weeks.  I still have my work cut out for me.