I mentioned earlier that we’re attempting to develop a meat herd that’s separate from our Herefords.

I’m going to get back to the meat herd in a second, but first, I need to digress.  This is will come back to pigs.

Sepp lives in the Austrian Alps and uses unusual methods to improve his land and even grow tropical fruit like lemons.

One of his tricks was his use of pigs.  Sepp would use pigs to do things like knock down berry brambles, improve the soil with their manure, etc.  He uses pigs to plow the soil up and also to seal the ground to make ponds.  Here’s a link that discusses more about this…  Walden Effect

The breeds of pigs that Sepp seems to favor are Mangalitsa, Swabian-Hall, Duroc, and Turopolje.  The Mangalitsa is what I’d like to talk about.

Mangalitsa (aka Mangalitza, Mangalica) is a famous breed.  It’s from Hungary and was the pig of kings/emperors in the Austro-Hungarian Empire.  I won’t get into a history lesson here, but you should know that Mangalitsa might be the finest pork out there.

Don’t believe me?  Here’s an article from the New York Daily News about $83 a lb ham.  Mangalitsa.

So, I liked Sepp’s way of doing things.  I also liked the idea of Mangalitsa.  It wasn’t going to happen though.  There weren’t any Mangas in the U.S.

Fast forward to me working as a contractor in Spokane.  The wife and I had been talking about having a few acres for a while and I really had the fever.  I went back to reading/watching Sepp stuff.  There was a lot more material on the Internet about his way of doing things.  I ran into the concept of Permaculture and some other things.  I was stoked.

I ran into Mangalitsa again in my readings.  By this time, we’d bought our first parcel, but I was still contracting, living in Spokane.  A few Google searches revealed that a Mangalitsa herd had been brought to The States.  What I found out next shocked me.  The herd was supposed to be near Reardan, Washington.  I often drove through Reardan to get to our parcel.

I made call after call.  It turned out that the Mangalitsa herd had been sold.  Gone back East to New York.  It seemed like it wasn’t meant to be.

More time goes by.  We get our first pig.  She’s a Duroc.  More follow.  Every once in a while, I’d hear a rumor about Mangalitsa and I’d make calls or go visit a curmudgeon raising pigs to ask.  No success.

Until last year.  In the late summer/early fall, we ran into a lady who swapped us some goats for pigs.  She said she was getting some Mangalitsa from a lady in Elk, Washington.  Unfortunately, she didn’t have a phone number.  She was waiting to be contacted by the Mangalitsa owner.

Now I knew to watch for them.  I started searching Craigslist at least once a week, reading classifieds, etc.

You might be wondering what all the fuss is about.  We already have pigs.  We have Hereford and Duroc.  This gains us entry into the meat pig market and the show pig/registered pig market.

There’s another market.  Charcuterie.  This is all about prepared meats.  People are curing their own bacon, smoking their own hams and making salamis at home now.  This can be done with any pig.  But, there are two breeds of pig that would be the ultimate for charcuterie.  They are the Mangalitsa and the Black Iberian.  Here’s a pic from Modern Farmer…

It looks like beef!  Dark red meat and look at the marbling!  This is a charcuterie pig!

Meet Petunia.  In my pasture. 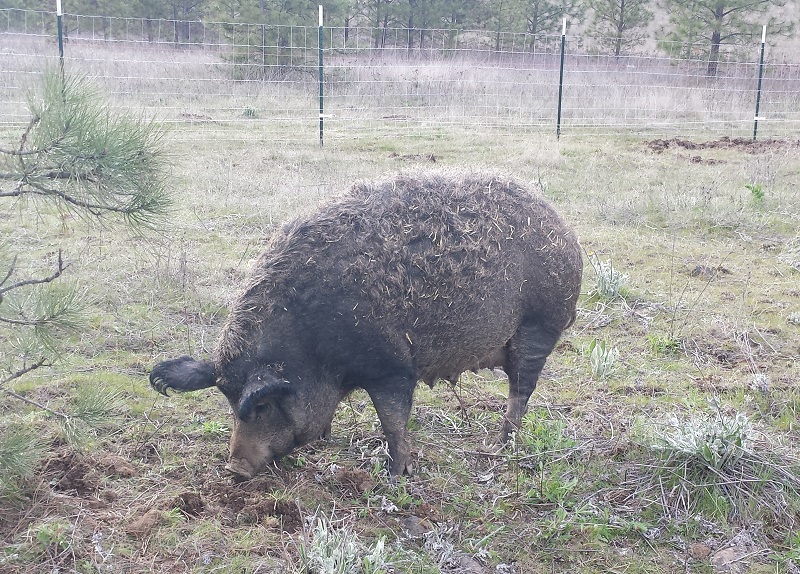 Petunia is 7/8 Mangalitsa.  The rest of her is Berkshire.  Petunia should be pregnant.  The sire-to-be is Mister.  Mister is 1/2 mangalitsa and 1/2 Berkshire.

So, you might be thinking that it’s too bad that I wasn’t able to get a purebred Mangalitsa.  Not so.  The first thing that I would have done with a Mangalitsa was try to cross it with Berk.

Mangalitsa tend to take twice as long as regular pigs to get to butcher weight.  Sometimes they take up to 18 months.  That’s too long to feed a pig.  So, I would cross Manga with something else.  Berkshire meat can be pretty great.  Some call it the Kobe of pork.  My hope is that the hybrid will grow faster while retaining most if not all of the advantages of the Mangalitsa meat.

You might have noticed that Petunia is a little furry.  Pure Mangalitsa have a lot more wool.  The wool isn’t used for anything btw.

So, Petunia has joined our meat herd.  We have high hopes for her and her coming brood. 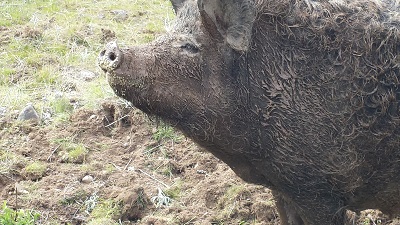