Meat pig breeders and raisers have one goal. They want a pig that gets to butcher weight with the least cost/most profit.

The factors that breeders deal with are: cost of pig, cost of facilities, cost of feed and maintenance/medication.

The big producers tailor feed, manage climate control and don’t let their pigs run around(confinement). This method works, but you have to raise a lot of pigs to make it pay. 300 to 500 pigs is common. This is the fast food of pig raising. The profit margin is thin and overhead is high. The butcher weight goal is 240 to 270 lbs and the pigs are about 6 months old when they hit this mark.

Smaller producers use feedlots, pens or pasture. Feedlot and pens use the same feed. They don’t spend as much on facilities and pigs are often less confined. The result is that the pigs might take a little longer to get to weight and results may not be consistent because of seasonal factors.

It takes a special kind of pig to flourish in confinement. The result is a pig that grows quickly, has little fat in the muscle and whose meat is white.

The downside is that the meat is less flavorful and has less texture. Another potential issue is the amount of medicine and types of inputs (like GMO grains) that these pigs receive. Thirdly, many people are coming to realize that they have an obligation or responsibility for what they eat. They object to the confinement method of raising pigs for ethical reasons.

The challenge is that there are a lot of very good reasons to raise pigs in a CAFO manner. It’s less profitable to raise pigs on pasture. It takes more land, results are uneven due to weather, season and other issues. Pig breed also comes into play because it can be difficult to get consistent outside results with the same pigs that grow quickly inside.

One way is using genetics to develop a pig that grows faster on the same amount of feed.  Paying to feed a pig for 6 months instead of 8 months to get to the same weight is significant.

Another way is to get more piglets out of fewer sows.  This is genetics as well.  Only keep sows that have 7 or more per litter (I don’t count their first litter).  Keep sows that are good moms, can put out more milk, have more teats, etc.

A method to increase profits is to sell a product that is of superior quality and/or is a limited quantity.  Mangalitsa is an example of this, Swabian Hall as well.

Sell a popular breed.  I’ve chosen Hereford, but there are a lot of other great choices like GOS, LBH, Berkshire, Chester White and many more.

I’m working on all of these.

I’m considering one more way to save a few pennies.

What about a breed of pig that grazes very well, requires less feed and does less damage to pastures and fencing?

I submit the American Guinea Hog.  It’s a lard breed, but that’s a good thing–pasture living can make some breeds too lean.  It doesn’t tend to uproot like other breeds and I’ve seen plenty of examples of pathetic fencing that it doesn’t challenge (See earlier Soil Born posts).

The downside is that it can take a long time for the AGH to get to weight.  It’s also on the small side.  What I’m going to attempt is to cross the AGH with a faster growing pig and see if I can get a pig that does well on pasture, costs me less feed and does less damage.  If all the factors work out, I’ll have a more profitable pig–even if it takes a couple more months to get to weight.  We’ll see.

It’s time to introduce Penelope.  There’s only one problem–she’s shorter than the weeds she navigates… 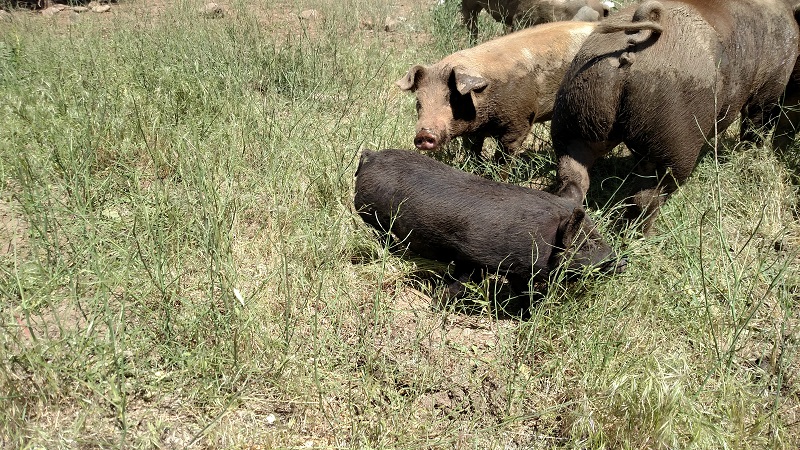 She actually looks bigger than she really is in the picture above. 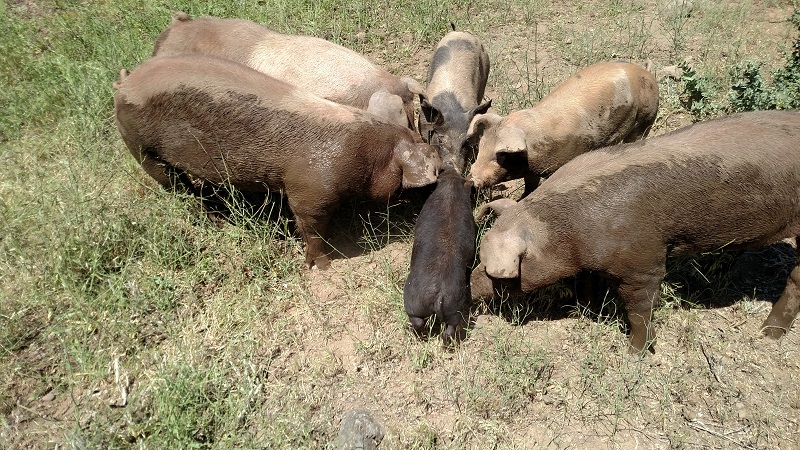 The other gilts greeting the new girl. 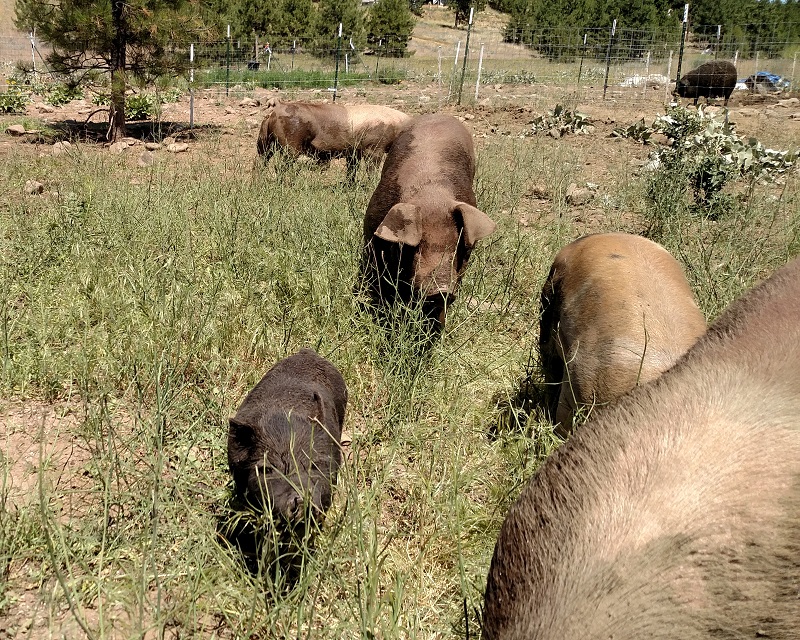 Part of the herd.

I’m not spending a lot on this experiment.  One gilt only and it’s probably going to be a year before she’s ready to breed.  The good news is that Penelope won’t cost much to raise.