Bought some goats. We were told that a pair of them were possibly pregnant. Only one of the pair turned out to be in the family way. This was okay because, well, we aren’t ready for milking, etc.

We also don’t have our medical kit built up for kids like we should.

Then, surprise, Warner was born earlier than we expected. Heh, heh, heh. Good one, Life.  But Warner is fine, after some stops and starts.  Not sure what we’re going to do with him, but he’s fine.

So, Warner was a little earlier than we wanted, but we’ll cope.

Besides, another of our goats, Daisy, is in the family way.  She should pop sometime in February or March.  We got her in September and after a couple weeks, we took her over to some friends, to meet a boy.

Daisy is definitely pregnant.  Her little udder is starting to swell.  So cute.  Can’t wait to see the baby or babies.  In February.  Or March.

Last Friday evening, there were no kids at home.  So I grabbed the wife.  We went out to eat and get some shopping done.  We eat out (Rusty Moose, you’ve done better), we shop and then drive home.

I’m unloading groceries from the car when I hear a bleat.

This isn’t any of their bleats.  It’s really high, kind of like Warner, but not as strong.  It’s also coming from the wrong pen.  I’m running to the pen.

This is the pen where I put Greta, because I’ve seen Greta butt a small goat and kill her.  Greta should be fine there, because there aren’t any tiny goats.

It was too dark for pics, but sure enough, there was a baby.  She had been cleaned up, but was still wet.  I got her to stand up.  All looked good.

All the goats seemed a little protective, so I decided to leave things alone until the morning.

Astrid, our new doeling, was pretty camera shy, so I don’t have good pics from Saturday.  Again, the goats seemed fine.  Greta even seemed engaged with Astrid.

Meet Astrid, with her mom, Daisy… 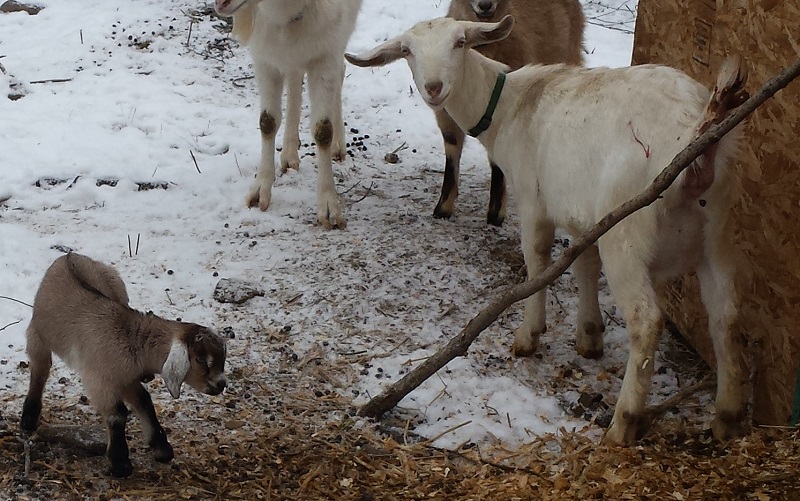 Astrid is no preemie.  Doing the math, Daisy must have been covered two or three weeks before we got her.

The wife mentioned that Greta has gotten so protective that Daisy sometimes can’t get to Astrid.  Sweet, I guess.