I learned something new about piglet birthing today.  I’ll get to it in a bit because I want to share my day.

I slept in this morning.  It was pretty cold outside and the pigs weren’t up when my alarm went off.  I crashed for a bit longer until Zoë (our dog) needed to go outside.

Zoë and I grabbed some feed for the pigs and wandered out to the pasture.  Lucy, one of our Hereford girls, was slow to come to the food, staggering and looking out of sorts.  Her time is close–my calculations say around the 23rd, so I was watching her closely.  She seemed ok, so I moved on, feeding the goats next.

We have two areas where we keep goats.  I was at the pen nearest the pigs when I smelled something.  I don’t know how to describe it, but it’s the smell I associate with pigs having babies.

I looked for Lucy.  She was laying down at the far side of the pasture.  I started to run.

You see, Lucy had a hard time when she gave birth last year.  I ended up having to assist.  She also wasn’t a very good mom, stepping on her babies.  It was her first litter, so none of that is surprising, but I had reason to be concerned.

The ground was covered in frost and there was a stiff breeze.  My heart sank when I saw two piglets lying still on the ground, nowhere near their mom.  They weren’t breathing but there was a little steam coming off of them.

I picked them up and ran to the house.

I had heard about something with newborn kids (baby goats) that come out not breathing.  I read a Facebook comment that said to try running warm water on the kid.  Why not try it on the piglets?  I had nothing to lose.

I didn’t think about it at the time, but I have such an amazing wife.  There was no screeching about washing the piglets in the kitchen sink (it was the closest hot water).  Pretty neat, right?

Anyway, I had a piglet in each hand, running them under the hot water.  I wasn’t sure, but it felt like the littler of the two was moving a bit.  I handed him to the wife and kept working with the other one.

The piglet I held wasn’t revived.  I don’t know if I could have done anything else besides the warming and palpitating.

The little guy was fine though!

Let’s interrupt my tale with a cute pic… 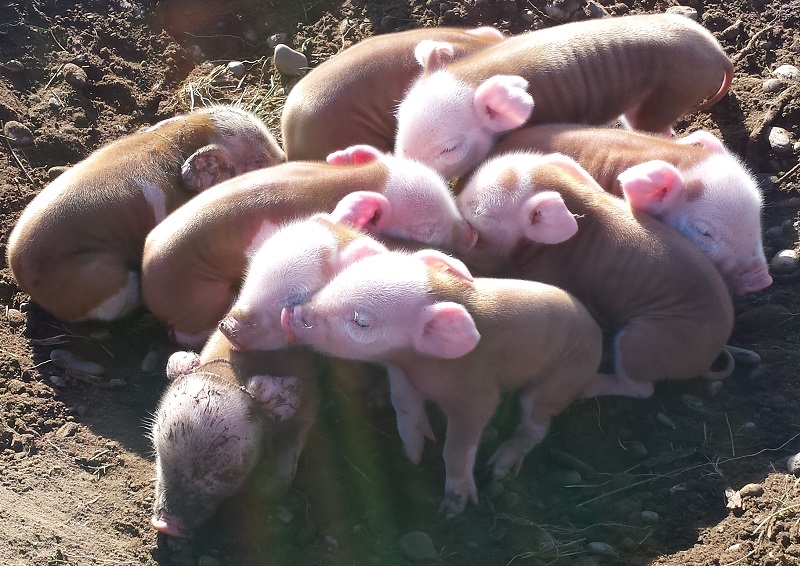 All the pigs in the above pic are fine–two are dirty because they didn’t get sink baths.  I chose to start bringing piglets in the house because Lucy was having a long labor and wasn’t up to taking care of them.

A piglet or two would be born and I’d run them to the house, where the wife and a daughter clean them up and love on them.

I was losing track of how many piglets had arrived.  I think it was when I picked up the eighth or ninth piglet that Lucy reacted.  The piglets had been squealing when I removed them, but Lucy had been too lost in her labor to notice.  Until right then.

Lucy is our sweetest pig.  People say that Hereford pigs have some of the best dispositions and Lucy is very affectionate.  Until right then.

She jumped up, her mouth gaping like a bear, prepared so save her baby.  So, I very quickly gave the piglet back.  All this happened with a little set of hooves sticking out of her you-know-what.  Don’t mess with Mama!  That’s when we brought the other piglets back out.

Lucy’s labor when from sometime before 7am when I found the first two piglets, to about noon.  She had a litter of thirteen, which is absolutely phenomenal.  We lost the first piglet that we couldn’t revive as well as the last two.  I think the labor had gone too long and the last two probably suffocated.

I’m not angry about the loss.  It’s the way things go.  A typical litter is eight piglets.  We have ten.

There’s so much to be glad about.  First, Chuck, our Hereford stud did his job well.  Additionally, Lucy is being a much better mom.  She’s much more careful with the babies when she gets up, walks around and lays down.  This second litter was her final test as a mom.  She did well.

I went to check on the piglets a while after Lucy was done.  One of the smaller piglets wasn’t getting a chance to suckle.  I worked with her a bit, but didn’t feel she was going to make it on her own.  I brought her in the house.

We mixed up some kid replacer (replacement goat milk) and put her on a bottle.  She’ll stay in with us for the night and we’ll try her outside again tomorrow. 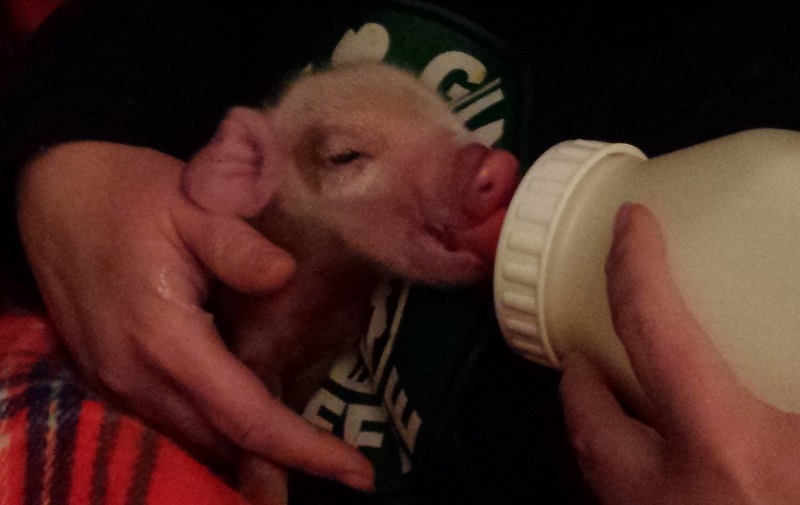 The pic above shows a happy piglet who is about ready to take a nap.

Some people might suggest that a runt like this should be culled.  Our experience has shown that the littlest pig can catch up in growth by the time they’re weaned, so we’ll give her every chance to grow.  She’s a vigorous little thing.  She’d probably be with mom if the litter wasn’t so big.

This a great end to a long week.  We’ve had vehicle issues, our clothes dryer died (again) and other life drama happened.  It’s all okay after a great day like today.

Our Hereford boar is very functional.  (with a name like Chuck Norris, how could he fail?)

Lucy delivered a large litter and is proving to be a good mom.

This is the first time we’ll have Spring pigs.  We’ve hit the right time of the year to sell piglets.

There’s another litter due in three weeks.