I want to talk about topographic maps.  There are some benefits, like guessing where it is best to put a well, finding out about elevation changes that you weren’t aware of, etc.

There are all kinds of smartphone apps for mapping your land.  You can plot way-points, border markers and even get rough elevation readings.  This is all great if a) you have a smartphone and b) your phone can do these things on your property.

Your smartphone might be impeded by trees and other natural features.

Even if your phone can do what you want, you may find some value in downloading a topographic map.

It’s been a while since some of us were taught all about different kinds of maps.  I first learned about topo maps in 4th grade.  The army was kind enough to refresh my memory later on, but some of you may want a recap.

Maps such as topo maps always have north at the top.

A topographic map is a map that shows terrain features.  Most of the time, topo maps cover only natural features, but sometimes you’ll see man-made features as well.

BTW, the word “terrain”  comes from the latin word for earth.  You see this word elsewhere, like, “Mediterranean” (it means middle earth).

Topo maps are also known as relief maps, because they can tell you how steep the land is.  Here’s an example… 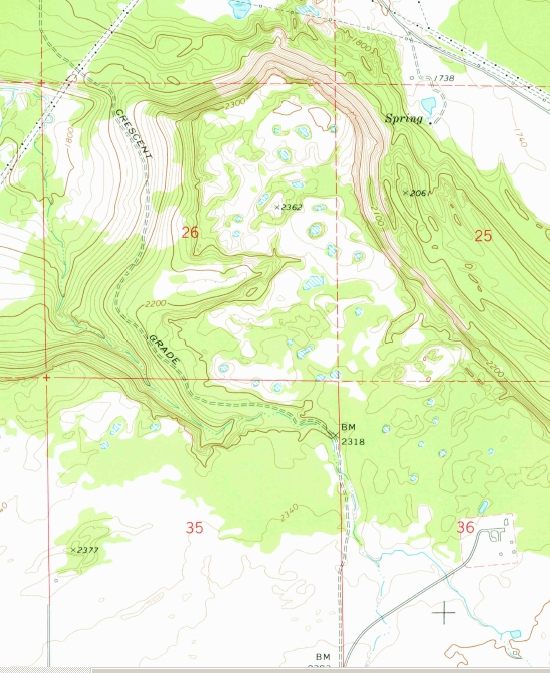 The squiggly lines are contour lines.  Some of the lines are darker than others.  The dark lines should have an elevation number somewhere on them.  An example is a line that is marked “2200”.  That number is the number of feet above sea level.

If the contour lines are far apart, the slope is very shallow.  The slope is steep if the lines are close together.

Let’s zoom in a bit… 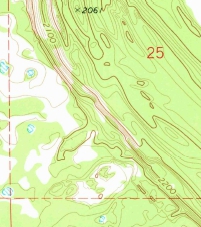 See the lines that are marked 2100 or 2200?  In this case, there are four fine lines in between. This indicates that the lines go in 20 foot increments between each other.

In a previous posting, I looked at the soil properties of a parcel.  (see “Check Out the Soil“) Here’s the same parcel, outlined in blue… 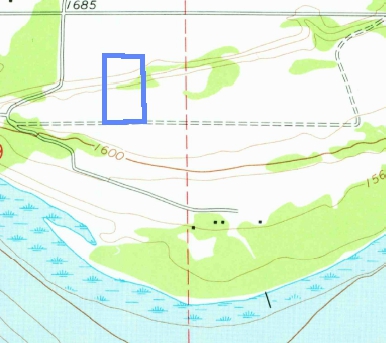 The road above the property is marked at 1685 feet above sea level.  Note that there’s a contour line marked 1600.  The property slopes to the south.  It has a very flat piece at the top, with a slope that drops at least 40 feet and then flattens out.  It’s a pretty good bet it is less than 100 feet to get to the water table.

Where can you get topo maps?  The U.S. government provides them for the U.S.A.  I’m not sure about other countries.

Here’s a website for the U.S. maps… U.S.G.S Maps  I was able to download an older map from the 70’s for my area, as well as a newer map that was a satellite or aerial photo that included the contour lines.